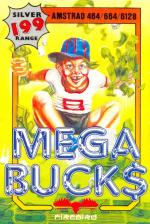 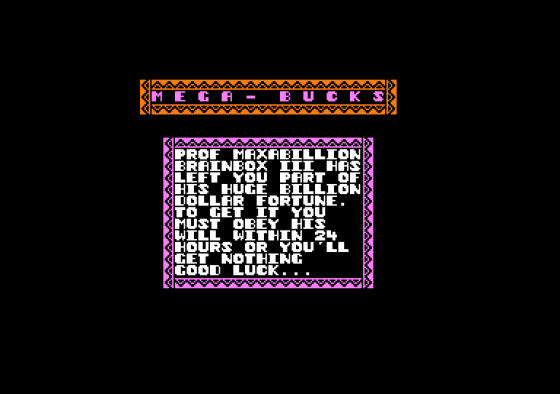 Your extremely rich and eccentric uncle, Maxi-billion III, has passed away and left his billion dollar fortune to you. Unfortunately your uncle was mean and shrewd and before he died he hid a video tape that holds the key to the inheritance.

The estate is made up of many flick screen rooms where you find objects to help in unravelling the mystery. In the lower part of the screen is a message window where useful bits of information appear. If you press on the fire button then a menu appears with an assortment of icons: pick up, drop, use, cancel, off and abort. Take care with the off icon because it resets the computer and you'll have to re-load the game. The cancel icon exits the menu and the abort one restarts the game. The others are concerned with object interaction.

Graphically Mega Bucks is nothing special with poor animation and little colour. Sound is limited to spot effects and there are no tunes. 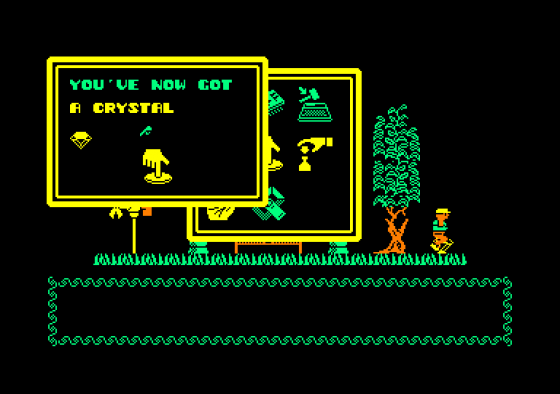 Almost as soon as you start to play you'll begin to notice similarities between this and Spellbound and the other Magic Knight games. The main difference is the use of icons rather than text to select options. Other than that the gameplay is almost identical. If you liked the Magic Knight games then you'll probably enjoy this.

There's no doubt it's a Magic Knight rip-off, but seeing as that was such an excellent series of games, they couldn't have picked anything better to copy. The problems don't seem too difficult and there's quite a bit to explore. It may not be Magic Knight but it will still provide many hours of puzzling.

Everything's easy to see in green. 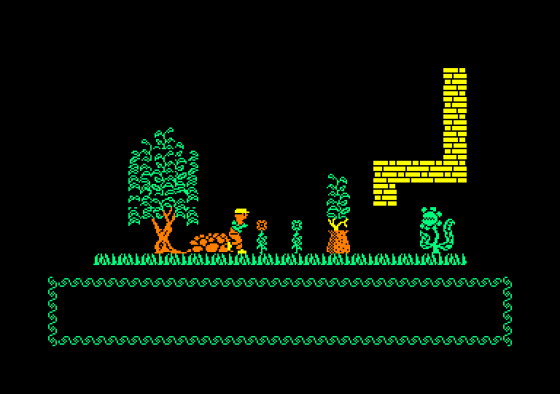 Graphics 47%
P. Clear and easy to identify icons.
N. Poor use of colour

Grab Factor 57%
P. Some early problems are easy to solve allowing access to more of the game
N. You move around very slowly and this makes the game boring.

If you liked the Magic Knight games then you'll probably enjoy this. 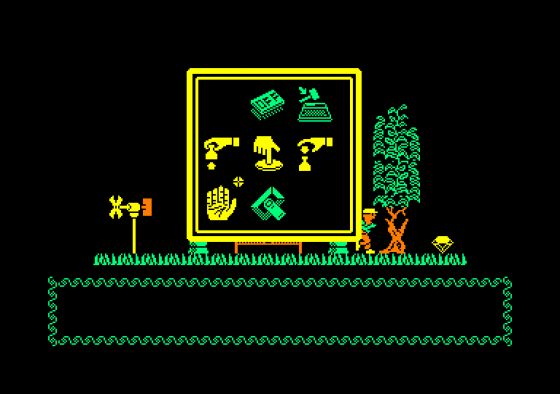