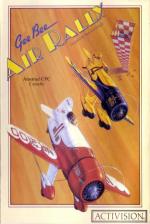 In the 1930's the Geebee speed plane was very popular amongst the braver (01 stupider) pilots, It was very fast, very ugly and lethal, to the pilot that is. It looked like an apple barrel, moved like the wind and steered like a cow.

You're under starter's orders in a race against time and other aircraft, for the prestigious Cartwright Cup 100 miles of race lies before you, divided into four courses and eight levels. In the first three courses you negotiate a course of markers and avoid other aircraft. If you don't finish the course within the time limit then you'll have to go again. Fail a second time and you'll be out of the game. If you collide too often then you'll have to bail out.

The fourth stage is a balloon bursting race where points are awarded for balloons burst. Pylons have to be avoided or you'll end up bailing out again After this stage you go to the next level and things get a bit more difficult.

Apart from the pretty pictures that you get when you bail out, the graphics are poor. The landscape scrolling is done simply by moving coloured bars on the ground to give an impression of movement. The markers and plane flicker too, making the overall impression that of a rush job conversion. Although there's a tune on the title screen, it's not much good and neither is the tune for bailing out. The effects in the game are feeble engine hums.

The difficulty level of this is set far too low; you'll probably complete the game within a week. As well as that, there's the simple fact that it's boring. All you do is dodge about a bit. There's nothing else to it.

Oh, Yawnsville City, Arizona. There's so little in this one to get you hooked. The flying is OK in itself but there's nothing to do once you're up there. Just doesn't excite the blood at all.

It's looks just as bad and is just as easy to play in green.

Grab Factor 47%
P. You can really throw the GeeBee around.
N. There aren't enough hazards or tasks.

Overall 39%
Old programming techniques used in a game with too little variation.

Eight levels of increasing difficulty but they're all basically the same.