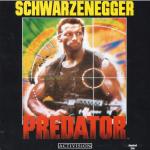 The game of the movie has arrived on a monitor near you. It features the muscle-bound hero of the film as he tries to escape death at the hands of an alien being.

You've been sent into the jungle to rescue the crew of a helicopter and the three diplomats on board. The jungle is filled with guerilla forces that pose a threat to you and the rest of the commando unit. Not forgetting of course the alien threat of the Predator.

Before play begins, you get to see all of the commando unit climb out of the helicopter. It's alright the first time, but since it happens every time you restart, it really does get annoying. You're presented with a view of the jungle that scrolls horizontally. Above this is a panel that indicates how much ammunition you have, your score and your state of health.

Initially you have a machine gun and a few hand grenades, but other weapons can be picked up as you go along. The game is split into levels: each one is loaded separately, even on 128K machines. The levels are completed by reaching the right hand end of the jungle in one piece. The guerillas and the occasional flock of vultures don't help you to achieve this end.

The ultimate threat is of course the alien. You know when he is tracking you because the screen changes colour to give an infra-red view, the alien sees in infra-red wavelengths. Don't let the triangle touch you because that's the view through his sights and he'll blast you.

The horizontal scrolling is smooth and the animation is slow, but flicker free. There's a terrible title tune and the in-game effects are little better.

Tedious is a word that comes to mind with this game - shoot the guerillas and avoid the alien, but what more is there to do? Not-a-lot.

I haven't seen the film but it couldn't possibly be worse than the game. All you do is run along shooting... errrrrrm... well, that's it really. The graphics are pretty murky and the whole thing fails to convey any atmosphere. It's bound to sell well, but that still won't turn it into a good game.

The vultures merge into the background a bit, but everything else is visible.

Grab Factor 39%
N. Having to re-load the first level every-time the game ends is annoying.
N. Irritating having to wait for the commandos to disembark from the helicopter.

Staying Power 46%
P. Lots of levels to go through.
N. Lack of replacement ammunition makes it too easy to die.

Overall 43%
N. Fans of the film will be disappointed.

It's bound to sell well, but that still won't turn it into a good game... The graphics are pretty murky and the whole thing fails to convey any atmosphere.