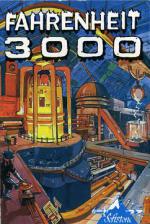 I have to admit that I have seen just about as many ladder and level type games as I can stand. This is yet another and although there is plenty of variety, there are 64 screens, and the graphics are acceptable, it has nothing new or original to recommend it.

It follows the usual format; you are collecting, sorry 'turning off', a number of valves in order to shut down a nuclear reactor that is in a Meltdown situation. There are plenty of the usual hazards to thwart you in your task, including barriers to jump over and stairs to climb. As I said earlier, the graphics are reasonable but in no way can they be described as special.

The only difference that I have found between this game and the usual versions is that there is no fixed number of lives after which the game ends. Instead, there is a fixed time limit after which the reactor blows its top off, or should I say bottom out, and the game ends in a suitably cataclysmic manner.

Graphics are reasonable... There is also a fixed time limit after which the game ends in a suitably cataclysmic manner.