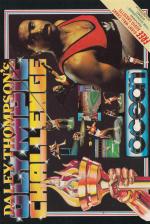 Can you match Daley Thompson's performance at the Olympics? As you know, Daley didn't do too well, so here's a chance to try to do better. This chance comes in the form of Daley Thompson's Olympic Challenge. Included with the game is a rather dodgy audio cassette and a tremendous Decathlon poster.

This is (of course!) a sports simulation and starts with the training events. The training events comprise weight lifting, sit ups and squats, each with a performance rating shown graphically by a Lucozade bottle (nice bit of sideways advertising there: if US Gold have Pepsi, Ocean get Lucozade!). At the end of the training, your coach gives you a percentage rating of how fit you are. This fitness rating affects how well Daley does in the Olympics later on.

After a couple of minutes we're at Seoul (faster even then Ben Johnson!), and we start the Olympics with an evil choice of four sports shoes. You have to choose the right trainer for that specific event, or winning the event becomes extremely hard. If you do pick the wrong footwear and fail to qualify then you are shown the correct footwear and are given two more attempts at the event.

This is a one player game and there are ten events ('Decathlon' - obvious really) and you have to qualify to go on to the next events.

Daley Thompson's Olympic Challenge is not bad at all. It doesn't capture your attention at first but after a while you go back just to have one more go. Pity about the sound, even with "a Ocean Exclusive Audio Cassette", but there's few complaints about the graphic quality.

Daley Thompson had a disastrous Olympics (but not half as bad as Ben Johnson's!), and yet somehow appeared to win more friends in defeat than in victory. Funny old world, really. Oh yes, the game: it's Daley Thompson's Decathlon (AA1, 81%) revamped, with better graphics, training in the gym and a bottle of Lucozade.

Grab Factor 59%
N. At first glance, Daley Thompson's Olympic Challenge isn't amazing.
P. The temptation to go back is there.

Overall 62%
Worth a look, waggling fans.

At first glance, this isn't amazing but for waggling fans, it's worth a look.