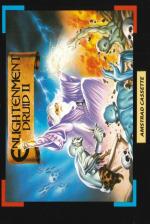 In the original Druid, (Mastergame in issue 15) Hasrinaxx defeated the evil Acamantor and four Demon Princes. Over a hundred years have passed since Acamantor's defeat and during that time Hasrinaxx has learnt much of druid magic. He'll need all his new power now because Acamantor has arisen again, and with him have come the Demon Princes once more.

The once happy population of the lands of Belorn have become zombies, the undead and walk through the lands in a mindless state, at the whim of Acamantor. You have no choice but to seek out and kill Acamantor and his evil minions.

Players of the original will instantly recognise the style of game, with its four way scrolling playing area and hordes of nasties. The status panel has moved from the top of the screen down to the bottom and changed considerably in its contents. There's still the energy bar that is depleted when you bump into creatures. There's also the energy bar for your Golem and the ratings bar that increases as you solve more of the game.

The additions include a bolt indicator that shows how much charge you have to fire electrical bolts; the lower the charge the slower the rate of fire. There's also a message window and eight spell windows. The message window gives you information about your surrounding and on what's happening. The spell windows show which spells you're carrying in your spell book.

Druid had eight levels of dungeon style landscape to battle through. This time there are 15 levels in all, but you can move more freely around them. Ten of the levels make up the land of Belorn, ranging from the icy wastes and burning deserts to swamps and dark caverns. The other five levels are Acarnantor's tower which is surrounded by a moat with no apparent means to cross it.

In Druid there were only a handful of spells, but in this there are 32 different ones. They range from mundane spells like door opening and lightning bolts to the potent Deathland and White Orb spells. Deathland and its companion Deathlight are needed to kill a Demon Prince, while the White Orb is needed to kill Acamantor. Other spells restore your health, neutralise poison, create magic walls, give invisibility, provide protection, repel nasties or give information.

The walls can seal off sections of the land and kill creatures in their path. The repellent spells are Turn Away and Crucifix which make your foes flee before you. One of the most useful is the Resurrection spell which when cast creates a grave. If you subsequently die then you will emerge from the grave, refreshed and ready to continue your struggle.

Your faithful servant Golem, who can be controlled by a second player, is back again. This time he's brought some friends from the other elemental plains of air, fire and water. Wisp, Phoenix and Kraken are their names and they are as dedicated a servant as Golem. Take care where you take your elemental because they don't survive long if taken into a place too alien to them. Phoenix doesn't last long in water and Kraken dies quickly in the desert.

To select which spell you wish to cast you simply press the appropriate number and hit space. It's usually a good idea to keep the spell pointer on a food or wine spell in case your energy gets too low; a quick press of a key and you're much healthier. You can also discard spells if you want to.

There are no tunes in the game and sound effects are not exciting either. The scrolling is smooth and the graphics are well animated. On some levels the elemental or druid is tough to pick out against a similarly coloured background.

Whenever a sequel comes out it usually fails to live up to the expectations, but this is an exception. The extra spells and bigger playing area make it a much more demanding game. There's also a detailed instruction manual with all the spell definitions and brief scenario. The option for a second player controlling the elemental is useful, but the second player has little to do; he's just an assistant to the druid rather than being an independent player.

If you liked Druid then you'll love this. If you didn't then give this a look anyway.

Achieve the rating of Earth Lord.

The sound effects, whether accidental or intentional, are amusing and very apt - the noises are akin to tiny insects scurrying along the ground. All other aspects of the game have been just as carefully seen to: detailed graphics, demanding gameplay and a large gaming area. It's a cracker.

Sometimes the druid or his elemental disappear into the background, but no more so than on a colour screen.

Graphics 78%
P. Bright colour graphics.
N. Sometimes the background and the druid are a little to close in colour.

Grab Factor 84%
P. Has all the addictive qualities of Druid and more.
P. Two player option.

Staying Power 89%
P. 15 levels of arcade action to go through.
P. More thought needed because of the greater number of spells.

An admirable sequel. If you liked Druid, then you'll love this. If you didn't, then give this a look anyway.