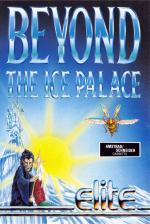 The forces of evil have been doing naughty things again in the lands Beyond The Ice Palace. They've been burning down trees and doing all sorts of other mischief that really gets on the woodcutters nerves. It was decided that a magic arrow would be shot into the air and the person who found it would undertake the dangerous mission of resetting the balance between good and evil. You must have enemies in high places because you're the one that found the arrow.

Fans of Ghosts And Goblins will immediately recognise the format of the game; in many ways the games are similar. You charge around a four way scrolling playing area viewed in 2D, hurling an assortment of weapons at the assembled evil forces. Above the playing area is a panel where your score, lives and number of spirits are displayed.

On the first screen you have a choice of three weapons to pick up; the mace is the most useful for baddie bashing and the dagger is fairly useless. Jump down the hole to your left and the adventure begins. If you're lucky, you won't lose a life doing this, but often you'll land on a bat and lose one of your nine lives. A very irritating start to a game. From then on you run, jump, climb and fall around the complex of tunnels and shafts, killing anything that gets in your way.

There are a multitude of hostile inhabitants: bats, ogre-like beings, demons and dragons to name a few. Bats hover around you trying to sink their sharp little teeth into you, one hit is enough to finish them off. The ogres carry large axes that they throw in your direction, but they too take a single hit to kill. Demons materialize out of thin air and they take several hits before they're despatched. The dragons need to be hit in every section of their body before they stop coming after you.

You do have one more thing that you can do to aid you in your quest and that is to summon a spirit. The spirit is large golden head that appears at the top of the screen. It moves from left to right as it moves towards the bottom of the screen and destroys anything that it hits, except for you of course. Spare spirits can be picked up as you travel through the game.

There are no tunes in the game or on the title screen and sound effects within the game are not particularly good. The four way scrolling of the screen is smooth and fast. Animation of the sprites is slick and flicker free. Colour is used very well throughout the game.

Apart from the difficulty level being set a little to high this is an fun arcade game. Some of the stages are very frustrating to get past, the lift shaft in particular can be very tricky. But you can have plenty of fun hacking and slaying anything that gets in your way.

The action is fast and furious - just what's needed in an arcade derivative. You can't exactly say it's got originality or gameplay you haven't encountered before. What it has got is very slick presentation. well worked graphics and a lot of challenge. My only gripe is the dreadfully slow loading system from tape that Elite insist on using. There's absolutely no reason why they shouldn't have something at least twice as fast and just as reliable. Other than that, it's an addictive and demanding game.

Staying Power 74%
P. Plenty of levels to fight your way through
N. Frustration may outweigh addiction in the long term.

Overall 77%
P. A fun run-and-blast game that should keep you occupied.

A fun run-and-blast game that should keep you occupied.