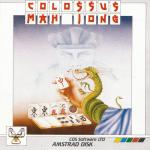 CDS are well known for games like Colossus Bridge 4 and Colossus Chess 4 which had challenging computer opponents. Now they have turned their hand to the oriental tile game. Included with the game are a tutor program and a detailed manual to help you learn the basics of the game.

The game is played with 144 tiles which come in several types: bamboos, characters, circles, winds, dragons, flowers and seasons. Bamboos, characters and circles are like the suits in cards and are numbered from one to nine. The wind tiles represent the north, south, east and west winds, and the three dragons are red, green and white. there are four of each of these tiles. There are also four flowers and four seasons being the four seasons of the year and the flowers corresponding to each season.

Each player is known as one of the four winds, much as in bridge. At the start of play a wall is built using the tiles and each wind is dealt thirteen tiles from it with the exception of the east wind who is dealt an extra tile. The aim of the game is to get rid of all the tiles in your hand by forming sets or runs with the tiles. This is known as "going Mah-jong".

East starts the game by discarding a tile from his hand. Any other player can claim the discard providing it enables him to form either a pung, kong or chow. A pung is a set of three identical tiles, a kong a set of four and a chow is a run of three tiles in the same suit. If the tile is not claimed then it is placed on the discard pile in the centre of the screen. Play cycles in an anti-clockwise direction until all the tiles have been removed from the wall (a washout) or someone declares Mah-jong. If a player only needs one tile to go Mah-jong then he is said to be fishing. To go Mah-jong you must have four sets and declare Mah-jong with a pair. Only one chow is allowed in your hand.

Points are scored after each hand, unless there's a washout when nobody scores, and they are added to your cumulative score. If the east wind wins then he remains as the east wind for the next hand, but if any other wind is victorious then the winds cycle one place anti-clockwise. Play continues until each player has been the east wind four times. A complete game of Mah-jong can take a ong time to play and so a shortened version can be played.

Other than the selection of which tiles to play, the program has several options that you can use in your turn. Dead tiles allows you to have the discard pile visible or hidden, the latter makes for a harder game because you have to remember what's been discarded. The expert mode removes flower and season tiles from the game, which eliminates much of the luck element from the scoring. A hint indicates which tile the computer thinks you ought to play, level changes the computer skill level, peep shows you what tiles your opponents are holding and wait adjusts how long you have to decide whether or not you want to claim the discarded tiles.

A new hand option starts a new hand without changing the wind of the round. A hand can also be re-played completely or you can just re-play the last discard. You can quit the game, but it would be better if you were asked to confirm that you want to quit rather than just doing it. Some of these options allow you to cheat so you'll have to resist the urge to use them if you want a fair game.

Sound is very limited with the only effect being a standard beep. The tiles look very pretty and that's all you get as far as graphics go; the rest of the display is just text.

Not having playing Mah-jong before didn't seem to matter really. At first it seems confusing, but after a few hands you begin to understand what is going on, and get into the swing of things. One feature that is lacking is a save game option. Some games don't convert very well to the micro, but this one does. Mah-jong players should find the higher skill levels challenging and newcomers to the game will learn as they go along.

I've played Mah-jong before so it was easier for me to get to grips with the computer version. It's excellent for both the beginner and the more advanced player, automatically performing all the hard parts of the game like the scoring and tile-handling. You can only have one human player but that's understandable because of the complexities of hiding players' hands from each other.

It's nicely presented, using the tiles to their best effect, although the constant redrawing gets rather wearing. You'll be playing this one for many years to come.

Graphics 54% P. The tiles are colourful and well-defined. N. Not much else as far as graphics go.

Grab Factor 78% P. Challenging and fun once you understand what's going on. N. A little confusing at first.

Staying Power 87% P. Nine skill levels will keep you occupied for a long time. N. No save game option is a serious omission.

AA Rating 82% A good conversion of a game that should keep many people happy for years.

A good conversion of a game that should keep many people happy for years.