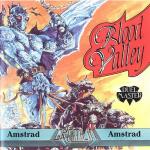 This is not the first time that fighting fantasy books have been turned into computer games. Way Of The Tiger, also by Gremlin, came out over two years ago. Fighting fantasy books usually pit a single player against a random assortment of foes, using numbered paragraphs to determine the outcome of the player's actions. The Duelmaster series, of which Blood Valley is a part, uses a pair of books, one for each of the two players needed. In the computer game, you have a one or two player option.

The Archveult is an evil reptilian being that loves blood sports. His favourite sport is hunting slaves as they do their best to escape the Valley of Gad. The Archveult does not hunt alone; he has three allies who also lust for blood: his son the Demiveult, Ka-riim and Kritos Bloodheart. In the two player game, one of you is the Archveult and his allies and the other is the slave. You are the slave in the one player game.

There are three slaves to choose from: a barbarian, thief or priest. Each have their own strengths and weaknesses. They also have some tasks to complete before they leave the valley.

The screen is split into two halves which show a view of the valley for each player. The bottom half shows the character's objectives in the solo game. A status panel for the slave is displayed on the right of the screen.

Here is a good example of bad graphics. The horizontal scrolling is jerky and the animation is appalling. There's a title tune that's alright and an average tune plays continuously in the game. There are no sound effects.

The gameplay is boring with very little to do. You wander around trying to complete your objectives and fight off the inhabitants of the valley. The previous fighting fantasy game was much better.

Complete one of your objectives.

No problems seeing everything in green.

Overall 35%
If you're expecting a role playing game then you'll be sadly disappointed.

Too easy to win and the gameplay is boring with very little to do. You just wander around trying to complete your objectives and fight off the inhabitants of the valley.