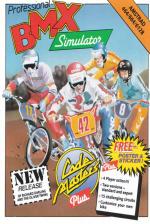 The latest Oliver twins project is an update of Richard Darling's BMX Simulator, reviewed in AA21. The scenario is almost identical, with the major difference the number of players. The original had up to two players, but now you can have three on keyboard and one on joystick - it could get crowded! (If there are fewer than four players the others are computer controlled.)

Across the bottom of the screen are the names of, and times for, the four bikers, while the rest of the screen gives a bird's eye view of the course. Each biker is a different colour and, not surprisingly, they are also viewed from above.

Your objective is to complete each track within a predetermined time limit. The first track must be completed within 100 seconds, a limit which decreases considerably on subsequent courses. The first track is no problem to complete, but life soon becomes more difficult.

Each track has of mounds of earth, hay bales, metal barriers and a variety of other hazardous objects. Earth piles disrupt the bike's trajectory and the other objects send you flying over the handle bars. When you're knocked off, you lose valuable time and remount facing in a random direction. On the first course you can afford to crash many times, but by the time you reach the third track, one crash can end your game. If a human player fails to qualify, he's replaced by a computer biker, until all the humans are out.

As with the previous Codemasters Plus, The Race Against Time, you get two cassettes for your fiver. The first contains the standard version on one side, and the expert version on the other. (The latter is tougher, but offers a choice of tyre widths and chainwheel sizes. Narrow tyres allow you to move faster, but they're not as good for turning corners. Small chainwheel sizes give you better acceleration, but a lower top speed. Riders can bump into each other in the expert version too.)

The second tape has two sets of extra courses - quarry and desert - that can be loaded into either standard or expert game. The final track in each set can't be raced unless you're playing the expert version of the game.

The background graphics that represent each course are detailed and colourful, but it has to be said that the bikes are small and sometimes it's difficult working out which way you're facing.

Green screen owners are going to have difficulty working out which bike is which. And don't expect digitised speech in this one - apparently there wasn't enough memory left. Sound effects are crude, but an excellent tune plays on the title screen.

The first few games are miserable, because of the tricky control of the bikes, but practice does make perfect. It looks and plays very much like Jet Bike Simulator - another in the Codemasters stable - and possesses the same frustrating and addictive qualities. The extra courses extend the game's life. Altogether Pro BMX is nothing new, the four player option makes it immensely enjoyable. Once you've completed it you're unlikely to play again, unless it's against other human players.

Definitely good enough to stand on its own. It appears the graphics haven't been touched up for the CPC - this is particularly noticeable on the large player views.

Griping apart, the bikes can turn on a sixpence, which makes the game quite fun. I've seen less enjoyable full price games. Oh yeah, one final thing: why can't you change the names of the players?

Grab Factor 53%
P. The option of up to four players adds to the fun.
N. Very difficult to control initially.

Overall 74%
P. Well worth a fiver - more than can be said of many full price titles!