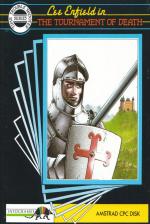 Lee Enfield returns from his venture into the future in Space Ace only to find out that the Yellow Shadow is up to mischief again. This time the setting is the 13th century in the castle that belongs to the Count of Savoy The Holy Shroud is a great religious relic that's being guarded by the minions of your arch enemy, the Yellow Shadow.

The first thing that you'll notice about the game is the small playing area, it's only about a third of the screen. Down each side of it are strength indicators. The rest of the screen shows a picture of a knight's head.

In the playing area you see a simple 3D representation of the room that you're in and any people in there. The people are all nasty and include guards, foot soldiers and bears. When you fight them you hold down the fire button and waggle like mad until they die Some enemies are much stronger than others. The loser is the first one to run out of strength on their indicator. Sometimes you find a chest that'll contain something useful like a suit of armour.

The graphics deserve a special mention because they are absolutely terrible. Not only do you have minute playing area with little detail in the graphics, but there's also the appalling animation I thought, and hoped, that I'd seen the last of flickery animation, but Infogrames have managed to take it to an all time low At least they haven't botched the music. Unfortunately when there are sound effects and music at the same time your ears beg for mercy.

A simple game with awful graphics and above average music. Let's hope Lee Enfield's next incarnation shows more promise than this one.

There I am peacefully wandering around a castle when this guy in a green cape leaps out and starts jittering around like he's just had a crab dropped down his trousers. Then it transpires that every few seconds I have to waggle violently to kill off the endless hordes of bad guys. And for what reward? Precious little.

Some of the enemies disappear into the background.

Graphics 28%
P. A pretty picture of a knight fills most of the screen.
N. The worst animation for a long time.

Grab Factor 34%
P. Map makers may find something to interest them.
N. Control of Lee is a little tricky.

Staying Power 26%
P. Finding the Holy Shroud and escaping with it will take a while...
N. ...if you can be bothered?

One frustrating, repetitive, joyless game. I guess that finding the Holy Shroud and escaping with it will take a while... if you can be bothered.