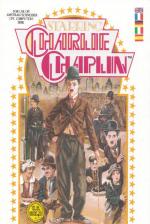 The famous silent movie star makes the move from the large screen to the small. The little man with the moustache, bowler hat and walking stick is being directed by you to make loads-a-money for the movie company.

The whole of the screen is a stage in which Charlie and all the other actors and actresses wander around acting. Before you start filming you have to select a script, there are plenty to choose from and they are all Chaplin film titles.

During filming you control Charlie who has to act out the scene, the rest of the cast are under computer control. The plot to most of the scenes is fairly simple, mainly due to the fact that Charlie can only walk around, climb, punch people or look stupid. The scenes usually last for about a minute and the movies themselves are made up of several scenes.

Once a scene has been shot you get a chance to edit it. On the editing screen you have a choice of freezing the film, playing it or fast forwarding it. It's a pity that you can't rewind it as well though. After all of the scenes have been shot you can then show the movie. A review will appear in Variety magazine and you'll get the critics opinion of your film. The better the review that your film gets the more money that you'll receive.

You won't he surprised to discover that the game is played in black and white, but that doesn't matter as they were trying to capture the atmosphere of a silent movie.

If originality made sales then this would probably be a number one. The novelty value is high, but in the long term you'll lose interest because of there's so little to actually do.

After a movie screening you often get the comment "Where have the laughs gone?" What I want to know is where the gameplay went. All you do is punch people - hardly exciting stuff. You can't actually "edit" a film, just watch it in replay. You can't even seem to use props to any effect. It was a terrific idea for a game but it won't leave the audience laughing.

It's black and green instead of black and white, no problems.

Get a decent movie review.

Graphics 48%
P. Detailed scenery and sprites...
N. ...but they are a little flickery.

Grab Factor 58%
P. Strategy and animated graphics combine to try to give initial impact.
N. It's a pity it doesn't work due to the lack of variety.

Overall 50%
P. Nice concept that doesn't live up to expectations.

A nice concept... It's a pity it doesn't work. Every script involves just walking around and punching people.