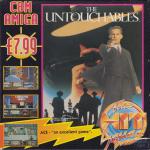 The Untouchables | The Bottom Line

I've never been all that popular in the Amiga Power office, so it came as a pleasant surprise when this one was nudged towards me. Although it follows the familiar multi-stage formula, with walking around bits interspersed with little sub-games. The Untouchables has always been considered one of Ocean's better film licences, and playing it again after all these years it's not difficult to see why.

What was difficult was getting the cheat mode to work using the supplied instructions, to allow a thorough appraisal of all the levels. It was beyond me, but luckily my legendary game-playing skills transcended all obstacles and I managed to give the thing a thorough checking out nonetheless.

Worth buying? It depends on whether you're into film licences really. Everything's very well put together and playable, even the Operation Wolf bits, and the game comes on two disks, so you get plenty of code for your money.

But you're stuck with playing each level in turn the whole time (unless you cheat), and that leaves the slightly boring first stage looking a little vulnerable.

A well-respected film game with lots to play about with and nice graphics, but you really wish they'd ploughed all their effort into one big super-level. (Which they didn't.)

The Untouchables | The Bottom Line

A well-respected film game with lots to play about with and nice graphics, but you really wish they'd ploughed all their effort into one big super-level instead.