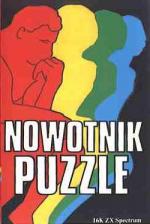 To compare the Nowotnik Puzzle with the Rubik Cube wouldn't be far off. It's a battle of wits and anyone can play it. Whether you solve or not is a matter of stamina.

You have a choice of two puzzles; each has four levels of difficulty and the start position is also the completed form of the puzzle - four large coloured squares.

To solve puzzle one you have to move one half of the puzzle at a time horizontally or vertically. The keys one to eight move the halves, and the numbers and arrows on the screen indicate directions.

In puzzle two, the screen is divided into vertical and horizontal strips. Again the finished puzzle is four brightly coloured squares. When you play this puzzle the strips rotate about the centre and the squares on the trips rotates to their opposite positions.

When solving this puzzle you select C for column or R for row, then press an identifying letter to move it into the position you want.

The aim of the game is solving the puzzle in the minimum number of moves.

I opted for puzzle one, at level one. On the screen appeared four large brightly coloured squares. Then the fun began. On went the music and the squares danced merrily on the screen into a jumbled form.

To remind you what you're aiming for, the right-hand corner of the screen shows a picture of the finished puzzle, and in the left hand corner a counter keeps tabs on the number of moves.

The puzzle certainly baffled me - I had clocked up 300 moves and was still no nearer to solving it.

It took me a while to get the hang of this one. I had to carefully work out where I wanted the vertical and horizontal strips to go, by identifying the column or row on the screen I wanted moved.

Sometimes a column would disappear from its position on a musical note and reappear in an unexpected position.

The game is well suited to the Spectrum and makes good use of graphics and sound. The musical theme each time you move a piece adds a touch of originality to the art of puzzle solving.

Well suited to the Spectrum and makes good use of graphics and sound.