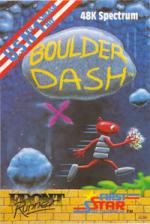 Boulder Dash, that jewel of Commodore 64 games, has now been converted for the Spectrum. If you've ever played the Commodore 64 version you'll be a mite disappointed, but if not, well what the eye hasn't seen...

The objective is to collect as many jewels as possible from the sixteen caverns in as short a time as possible. There are five skill levels, just to keep you on your toes. Up to two players can join in and other options include Q to quit, S to re-start and Space to pause.

You can use joystick or keyboard - as far as I was concerned the latter was better, not because I prefer sticks, but because of the weird choice of keys which you can't alter: E, F, M, C for up, down, left and right?

With three lives, I set off in cave A, level one. The screen scrolled back and out popped Rockford, the hero of the piece. One of the nice touches about this game is Rockford's character. If you don't move him pretty quickly, he just stands there, tapping his foot impatiently. I sent him off shunting boulders and collecting jewels - level one's a piece of cake.

On to the next level. It's easy here to get buried by falling boulders, brained by tumbling jewels, or if you're too cautious, run out of time.

The graphics are colourful, but the scrolling's a bit jerky. The sound is limited - no crashes here when the boulders tumble! Even if the translation isn't quite all it might have been, Boulder Dash is a great game.

Boulder Dash is a great game... The graphics are colourful, but the scrolling's a bit jerky.