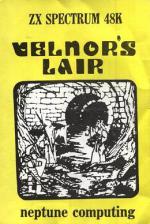 Playing an adventure game is the nearest you can get to a Sinbad type of voyage. But once you've played a few, the same elements keep cropping up - a rescue or search of some sort, with a touch of danger thrown in along the way.

Velnor's Lair is no exception and gives its dose of the usual formula.

The Black Wizard Velnor is about to realise his ghastly ambition to become a true demon on earth. There is only one hope for mankind, that one brave adventurer can penetrate Velnor's defences and surprise him before metamorphosis is complete.

To take on Velnor you can be a priest, warrior or wizard. Each character has different strengths and weaknesses.

Dressed as a warrior, I arrived at the foot of Mt. Elk carrying a torch, club and tinderbox. With my torch lit I moved towards a narrow passage to the north. On arrival I was told the passage was blocked with thick yellow webs - and asked "what will you do?"

Well I burnt the webs and down dropped a giant dead spider from the roof - phew! I hate spiders.

After going in and out of several passages I ended up in a dusty cavern, slashed through with crevasses which were spanned by a small bridge. Being careful I entered the command 'examine bridge'. And guess what, it was an illusion, another close shave and with the command E I went East.

The next thing I knew I was fighting my way through fungus growths, the air filled with fungi spores and I was choking to death. Desperate, I tried to go north, south, east, west - anywhere! But my luck had run out and in one swoop I was choked to death to the sweet sound of music.

I was a sure sucker for this game, each time taking on a different character. After a while you learn where the pitfalls are and how to avoid them, but there's always a new problem to tackle.

Although there aren't any graphics, the descriptions and use of music at devastating moments make Velmor's Lair an interesting game to play. And if you want to continue the action another day, you can always save it on tape.

I was a sure sucker for this game, each time taking on a different character.