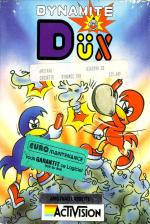 You are a loveable duck armed with a portable rocket launcher, out to rescue your girlfriend. Watch out for the bouncing dog heads.

You may be one of those people who perceive ducks as harmless feathered fowl that go well with oranges, but this game could drastically change your point of view. A mad duck is a mean dude... and this duck is exceptionally disgruntled.

When the delectable Lucy fell foul of the fiend Achacha, Bin and Pin set forth to wreak retribution. Unfortunately Pin had to cancel his appearance due to the shortcomings of 8-bit technology. Despite having to face the bad guys alone, Bin puts up a brave fight (probably due to the portable rocket launcher he totes) but he soon finds the need for a hard-bitten joystick jockey to guide his actions: enter you. This mission is not without its hazards and anyone delving into this world cannot do so without having a few mental boundaries stretched as the characters encountered are nothing short of bizarre. The bouncing dog and deer heads I could handle but the rats with spring midriffs and large booted mice took a little bit of swallowing, but very tasty they were.

For once, the CPC pulls out all the stops and brings on the multi-colour sprites. In fact the graphics are great and the combination of quality and variety make this a game a visual treat. Unfortunately, to achieve this memory guzzling feat, the size of the playing area has been reduced. This means that it is all too easy to wander past the weapon of your dreams because it is just off screen when you pass.

Despite its size, the scrolling play area conveys the impression of a large play area as it twists and turns through urban streets and jungle tracks.

To combat the myriad menagerie of monsters the hero has at his disposal an arsenal that would make Rambo envious. Each weapon has a limited number of uses but as they are plentiful this is no problem.

You start with rocks and bombs but progress to the deadlier homing missiles and rocket launched boxing gloves. If your duck finds himself without the benefits of hardware he can always employ the secret weapon, a right hook that would put Tyson to shame. The longer you hold down the fire button, the larger his fist becomes, releasing the button lets the punch fly.

The animal adversaries which our duck must battle come in many forms, the deadliest being the mid- and end-level guardians. Most monsters encountered are easily killed and doing so occasionally liberates food in the form of cake which can be used to replenish depleted energy levels. The guardians depart from the animal theme as they are made from the elements. Fire, electricity and stone being the common ones.

Combating the fire elementals is far from easy as you try to douse their spirits with a water cannon. The action is constant and the cartoonish characters make this game ideal for the younger psychopath.

The action is constant and the cartoonish characters make this game ideal for the younger psychopath.