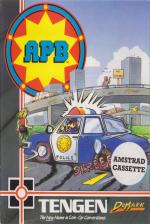 Officer Bob is mean, tough and hard and kept on his toes by his highly short-tempered boss.

Officer Bob is the law. He is mean, tough and hard. Well, he is for someone who eats twenty doughnuts a day followed by ten cups of coffee, each containing three spoons of sugar, and who spends the entire day on his bum. But what he lacks in physical ability he makes up for in enthusiasm, which is kept at a constant peak by his shorttempered boss.

The week starts with a little refresher course in how to arrest cones. This section of the game is optional but advisory; it allows you to familiarise yourself with the controls of the car and the use of the arrestng siren. The controls themselves could not be simpler as they mirror the movements of the joystick. This need only be used to correct or alter the movements of the squad car, as otherwise a constant speed and direction is maintained. In front of your vehicle there is a representation of a steering wheel; the faster you travel the further in front of your car the wheel appears.

When holding the fire button, this steering wheel becomes the arresting siren which, when placed on a subdued crook, arrests them.

Having mastered the basics with the cones in the car park it is time to hit the streets. A birds-eye view of the city charts Bob's progress as he attempts to negotiate the finer points of one-way streets. Unfortunate incidents like running over pedestrians and head-on collisions with trucks earn demerits. Enough of these and you are out. Sometimes it is worth losing your job, just to be able to witness the dressing-down Bob receives from his boss. These animated scenes range from one where mad Bob the pedestrian killer is thrown into the loony van to one where he receives a quick toasting from the boss's fiery breath.

Out on the street Bob must pull in his quota of miscreants and hardcore crooks. Some crooks can be captured simply by running them off the road with your squad car, but the other slightly meaner baddies require a slight sprinkling of lead. As Bob traverses the city (which is huge) he will encounter sacks of money, doughnuts and various other bonuses hiding in the side roads and fields. Most of these items instantly give extra time but the doughnuts must be taken to the doughnut shop and exchanged for it. The money which Bob either earns or finds can be used to beef up his squad car. With any luck, this will give him the well needed edge which will compensate for his nature ineptitude.

This game is not to be taken seriously. It is strictly fun. The game is easy to get into and the captain's antics are guaranteed to delight.

Why bother taking a walk on the humorous side of life when you can drive there with the sirens screaming?

This game is not to be taken seriously. It is strictly fun. The game is easy to get into and the captain's antics are guaranteed to delight.