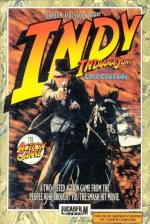 Indy takes on the Nazis in a blockbusting last crusade.

Once again Harrison Ford defies belief as Indiana Jones attempts to thwart the attempts of the German army to get their hands on yet another holy relic. This time they are after the Holy Grail, source of eternal youth and miraculous cures. Indy's interest in the Grail stems not so much from its magical powers or great archaeological interest but the fact that his father was tracking the Grail and has been kidnapped by the Nazis.

The game is based on the script of the film and not the film itself so there are a few differences. The differences are not too drastic and still fall within the realms of artistic licence.

Indiana, or Junior as his dad is wont to say, starts the game by recovering the Cross of Coronado from a band of unscrupulous laths. In the film the escapade involves the young Indiana but things went slightly astray and the storyline of this section bears a rather tenuous relationship to that of the film.

After a series of loading screens and a fair rendition of the title tune the game begins. The scrolling section of the play area is surprisingly devoid of colour, i.e. black and white, though the status and score panel underneath add little colour to the scene and help distract from the scrolling areas deficiencies.

Indiana sets forth in what is essentially a multi-directional scrolling platform-and-ladders game.

Thankfully the game holds more appeal than other games of this ilk, mainly due to the large graphics, the mean dudes and the comical way Indiana holds on to his hat when he jumps. Indiana initially is armed only with a rather devastating left hook but later in the level he has a chance to pick up his whip. It can be used five times and has a far greater range than the fist.

Despite its logical superiority the whip fails to deliver and you are much better off with your bare knuckles.

Using the whip is slow - so slow that the bad guys have either shot or collided with you, both of which abort the whipping process.

Torches can also be found in the underground sections and without a constant supply of them the screen gradually becomes darker and darker until play is no longer possible. Once Indy has traversed the many platforms, some of which disintegrate on contact, climbed countless ropes and explored the vast mine-like complex, he finds the cross and exits to level two via the copy protection.

You could be forgiven for thinking that the copy protection was another level but failure to enter the correctly-decoded doorway results in the item of your quest not appearing on the next level, thus preventing you finishing the game.

The second level, Ascent on Castle Brunwald, leaves behind the cowboys and indians and replaces them with rats and fireballs. Starting in the sewers, Indiana must leap from rope to rope avoiding the pits which have a tendency to occur under the ropes. Recovering the shield allows Indiana to scale the front of the castle to gain entry and thus rescue his father. As Indiana approaches the castle, lightning illuminates the scene, causing sections of the masonry to tumble leaving hazardous gaps and causing considerable aerial hazards to rope-climbers.

Next is the zeppelin jaunt. The screen is in constant motion and, when combined with your joystick commands, produces some rather uneasy visuals which manage to create the motions, guaranteed to induce air sickness. If you miss one of the tickets and your current one runs out the alarms will sound and the guards will move faster. The fourth and final level is a departure from the platforms-and-ladders theme.

In a mad dash to obtain the grail before your father dies you brave bottomless pits and circular saws. In the 3D section you can move in and out of the screen to line up your next leap and avoid the rather vicious-looking blades which move across the surface of some platforms. Despite the game bearing more resemblance to some of the earlier platform games its large, animated sprites and fiendish designs make it worthy of the Indiana name.

Despite the game bearing more resemblance to some of the earlier platform games its large, animated sprites and fiendish designs make it worthy of the Indiana name.