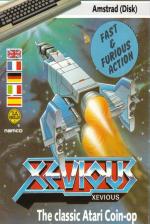 Xevious is set in the future, where you control a Solvalu spacecraft. You must shoot the Xevians who are attempting to reclaim the heritage they evacuated before the ice age. I say let them have it. I'm a non-racialist!

The Xevious force takes the form of frisbee thingies which bomb you - even though you are at ground level - and more conventionally styled planes. While dodging and shooting the oncoming enemy attacks, you must bomb the Xevious ground entrenchments or dodge their accurate bombs.

As you start to get closer to your final goal, you encounter tanks which shoot at you and are harder to bomb. Eventually, the Xevians will send in their final defence, flying mirrors. They cannot be shot, and will pulverise you if you do not dodge them.

Once past them, you find the Andor Genesis mothership. One direct hit to the central reactor will blow her to smithereens. Well, it's not really smithereens; you just see a hole appear in the middle.

This game started off with lots of appeal and promise. Unfortunately, nothing materialises. The downward scrolling of the screen is good, but the action is slow.

This isnt a bad little shoot-'em-up and had me glued to the joystick at first. The trouble is there's not enough to keep you playing for long. As for the mothership, I must have blinked and missed it.

Sonics 43%
N. Sound is average with no stunning explosions.

Grab Factor 71%
P. Initially the desire to complete the game is compelling.

Staying Power 52%
N. Too easy - I didn't realise I had shot the mothership because nothing spectacular happened!
N. Insufficient realisation of the initial promise.

Overall 57%
N. Not as good as Lightforce.

This isn't a bad little shoot-'em-up and had me glued to the joystick at first. The trouble is there's not enough to keep you playing for long.