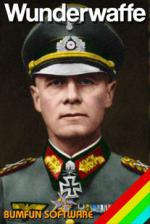 A secret Nazi base where terrible weapons are developed to inflict upon Allied soldiers. Dave E sets off on a mission to find some blueprints that may alter the course of history...

Rafal Miazga's Wunderwaffe is a flick-screen graphic adventure in which you play an Allied officer in Nazi uniform. Your mission is to find eight pieces of the blueprint for the "Wunderwaffe", literally the "wonder weapon" of the Nazi offensive. It has the potential to turn the tide of war in the Nazis' favour if they use it, and they're getting desperate so they just might. The Allied forces know only that it exists, so your search and recovery mission is undertaken only with the hope that, if only the Allies can get more information on what it is, they might be able to uncover some weaknesses to render it less wondrous. Or something. Just find the documents, alright?

The Spectrum has quite a large library of graphic adventures, and I have a particular fondness for The Happiest Days Of Your Life (cheap and cheerful) and The Addams Family (super-professional). Wunderwaffe is, in quality, somewhere between the two. What immediately struck me was that the sprite sizes are actually quite large - your soldier, and indeed, the enemy soldiers, are all quite tall, thin chaps. Obviously the Spectrum has quite a small playing area (256 x 192 pixels) and these big sprites have a significant impact on how many platforms can be comfortably squeezed into a screen before your character starts to bash his head on the ceiling if he tries to jump any higher.

Control of your Allied officer also requires a bit of practice. If he is standing still, and you attempt to jump him left (or right), you must press the left key and then the jump one, otherwise he will jump vertically up rather than in the direction you want. You also have to judge your moves carefully because he jumps, and falls, quite slowly. The Nazis, who litter the screens, move in set patterns but shoot on sight as long as they are facing in your direction. All too often you jump from a platform above whilst the Nazi below is looking away from you, but it takes so long for you to sail down to the platform below that, before you land, the Nazi has had not only time to turn around and see you but also to start unloading bullets in your direction.

You have limited supplies of everything: life force, ammunition and time. When hit by a bullet, you take a *lot* of damage. Five or six direct hits and you're a gonner and, if you get close to an enemy, as soon as one bullet hits you he fires off another. Logically therefore, the closer you are to him, the more bullets he can pump into your groin before you take him out. This is especially irritating in itself... but Wunderwaffe is also one of those games where, once you exit and re-enter a room, all the enemy soldiers reappear again... and you have to fight them all all over again.

To top up life force and ammunition, and to increase the mission time, you can pick up certain icons which seem to be bordered by picture frames and hang on the walls throughout the Nazi base. To pick these up, you must stand in front of them and press the Down key. And, be careful: You have to stand directly in front of the picture frame for this to work.

I've played a lot of platformers in my time and, when I first played this one, I only traversed four screens before I was drilled full of lead and told "Mission Failed". A few hours later I was able to get about twenty or so screens in before I met the same fate. Why? Well, because playing Wunderwaffe is like learning a rhythm game. Repeated attempts at each screen will reveal to you where to stand and when to fire in order to reduce the risk of being fired upon. Eventually, with repeated play, you will get further and further. Unfortunately, every new screen you walk into has the potential to have a bunch of patrolling Nazi soldiers looking directly in your direction. Sometimes you need to jump "into" screens to avoid being hit by them, yet there's no way of knowing this in advance, only with repeated play. Hence, even seasoned platformers will find they must die many, many times to stand a chance of completing this particular mission.

It has its good points, sure. The graphics are good and the screen designs are imaginative. But the fiddly controls, large sprites and general unfairness of play outweigh these. On one occasion, I even found my soldier jumped to the right when I was clearly commanding him to jump left. How that is possible I don't know but it really underlines just how frustrating the game can be. There's a fair mix of different enemies, and I liked the strategically placed doors and elevator shafts, but then these too start to pale into insignificance when, each and every time you die, you have to start all the way from the beginning again.

Some people might argue that this deliberate (it can only be deliberate) high difficulty level gives Wunderwaffe a tremendous amount of lastability and I have to concede that, if you really want to save Europe from Nazi dominance, you might find some of the more irritating game mechanics to be as much challenge than irritant. Personally I got sick of having to play through the first puzzle over and over again.

Overall: Just about average platformer with a very high difficulty level. Suitable for those who are willing to practise and learn the patterns needed to make it through each screen.