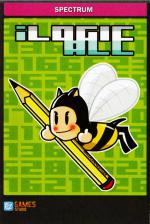 Regular readers will recall my favourite retro game of 2015 was Pixel Quest, a puzzle game where you build up a picture on a grid by reference to a series of numbers on its horizontal and vertical axes. Apparently, these "nanogram" games have existed for years and I am in the minority having not experienced the joys of such pixel-plotting before.

Ilogicall is the same type of game. You get a blank grid, typically 16x16 characters, and must look at the numbers to determine whether you can safely "mark" individual rows and columns in compliance with what they say, but without disturbing the combination required by the opposite axis. The grids begin easily enough, with columns simply stating 16 meaning each square in it should be "marked", and row combinations such as 2128 (XX.X.XX.XXXXXXXX). They do however start to toughen up after level four.

So far then, so identical to Pixel Quest. Indeed, there's really only one big difference between the two games. The difference is what happens when you make a mistake, either carelessly or recklessly. Ilogicall's grids have a thirty minute time limit. Very generous, until you realise that "marking" a single square wrongly incurs a five minute time penalty. The implication of this is that you can afford to make a maximum of roughly five mistakes per grid before your time will be up. Pixel Quest has no such limitation, each grid took you as long as it took and, on successful completion, a brand new one was presented.

What is quite interesting about a "timed" version of Pixel Quest is that being thwarted by your own carelessness does actually mean you don't find you've lost several hours playing it non-stop. Being thrown back to the title page and having to start again breaks your intense concentration and results in Ilogicall being slightly less addictive. It is however, more challenging.

Overall then, despite having been (mostly) done before, there is just enough of a change to the nanogram formula that this should be added to your games collection. Competently programmed with a superb loader and in-game music, it will also likely make this year's favourites too.

Available to buy on limited edition cassette from Computer Emuzone (computeremuzone.com), preloaded on the ZX Vega or available to download for free from Everygamegoing at https://tinyurl.com/jqrrh5q