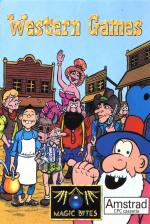 Enough of all those sporting simulations, let's get down to the serious competitive events of arm-wrestling, beer-shooting, quid-spitting, dancing, milking and eating. The program is a multi-load with one event in each part. You can either play against the computer or another player

Arm wrestling is first on the list and the screen is split into two pans. The bottom shows a picture of you and your opponent sitting on either side of a table surrounded by a crowd of cowboys. The top of the screen shows three cams, one is yours, one is your opponent's and the middle one is used to increase strength. The central arm continuously moves in a pumping action and you try to pull back on the joystick when the arm is in the vertical position. The winner of the bout is the one who forces his opponent's arm down into the candle flame.

A point is scored every time you win a bout and the winner of the contest is the first to score three points. You then progress to the next opponent and continue until you lose a contest. Money is won each time you win a contest and this is added to your score for all six events. The higher the level of the opponent, the more chance that he will cheat by putting his hand on the table. You can also cheat, but make sure that the sleepy headed judge doesn't see you.

Quid-spitting allows you to take up the bad habit of chewing tobacco and spitting into your opponent's spittoon. The winner is the first person to get the required number of hits in the spittoon. Spitting is not as easy as you may think because you have to bite the tobacco, chew it, cam it and then let fly with a mouthful. In dancing, you try to do the can-can after a little tuition from a dancing girl. You and your opponent then go up on stage and mimic exactly what the girl did. If you succeed in the dance then you continue on with more and more complicated dances, but if you miss the beat, the crowd get rowdier... Eventually they will hit the pianist on the head and he refuses to play again until the person who missed the beat buys him a beer.

If milking a cow is as difficult in real life as it is in this game, then I'll stick to going down the shop for a pint. To get milk out of a cow, you have to follow a sequence of joystick movements and keep pace with the fluctuations in the cow's udder.

Finally, there is the eating contest in which you compete against an opponent in a race to empty a bowl of stew. The food has to be spooned into your mouth and then chewed before you swallow. If you chew too much, then you will swallow a lot of car and as a consequence you end up belching, which slows you down. Drinking in between mouthfuls helps in swallowing.

Tunes occur in some of the events and spot effects appear throughout the game. The graphics are large, detailed and colourful. Each of the events has attractive graphics which are well-animated.

Sporting simulations have been around for a long time and this is probably one of the least serious attempts. Mastering all six events will take you a long time and you may come back to this later for a quick waggle.

Western Games is an excellent sporting spoof that proves very enjoyable. The graphics are exceptionally good and, although the gameplay is limited for each event, they are tough enough to keep you trying. My personal favourite is the beer shooting which seems to have the right blend of marvellous animation and addictive action.

No problems in green as you play cowboy.

Graphics 92%
P. Attractive graphics on every level.
P. Well animated with a touch of humour.

Grab Factor 77%
P. Great fun watching the expressions change of all the characters on screen.
P. Being able to cheat against your opponent makes it more fun!

Staying Power 78%
P. A simple game to play, that will take a long time to master
N. Tends to get repetitive

Attractive graphics on every level... Great fun watching the expressions change of all the characters on screen.