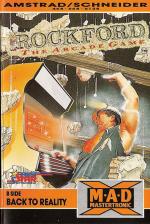 In the beginning, there was Boulderdash (AA1). Then there was the Boulderdash Construction Kit (AA29) and now Rockford's back in another adventure. The plot's the same: you travel around a vertical maze collecting treasures and not getting trapped or killed by falling rocks and hostile monsters.

The screen is a four way scrolling playing area, and below it is a panel with your lives, score, time remaining and number of treasures to collect. Bonus points are awarded for treasures collected in excess of the number required. If time runs out you lose a life and have to restart.

Graphically it's nothing spectacular - in fact, it's very similar to the previous games in which Rockford starred. There are some good effects and great tunes. The scrolling is slow and jerky. Animation is crude but effective.

I was once an avid fan of Boulderdash, but I eventually tired of the same style of game, and that's what happened with Rockford. There are plenty of screens, loads of puzzles and the graphics vary from world to world, but it's still the same old game. Perhaps Rockford should stay buried under rubble this time.

Note: There is the added bonus of a freebie game on the B side, Back To Reality, reviewed in AA16 and rated at 81%.

This Boulderdash clone isn't bad at all, but it's still a clone. The original was a classic and there have been few others on the Amstrad. At the price - and with Back To Reality on t'other side - it's pretty good value.

Grab Factor 54%
P. Starts off easy, but the difficulty soon picks up.
N. Aargh! Not another Rockford game.

Staying Power 63%
P. Eighty screens to complete.
N. Rockford must be tiring of jewel collecting by now. I am.

Overall 59%
If you haven't got any Boulderdash games you could do worse than spend your money on this... Otherwise wait for something more original.

If you haven't got any Boulderdash games you could do worse than spend your money on this. Otherwise wait for something more original.