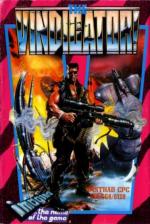 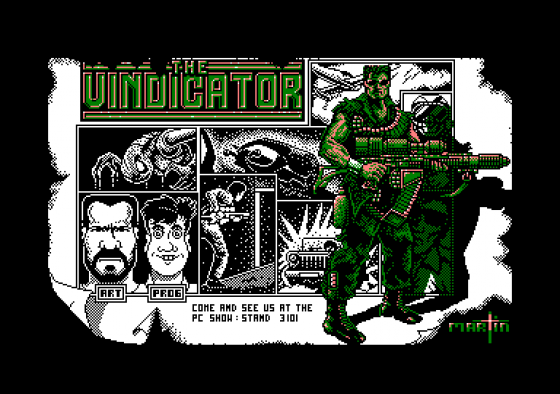 He's tough. He's mean. He's got a tiny little head and arms as thick as your torso. He's the Vindicator, and he's the hero of the latest Imagine romp, in which, guess what, you're the only man alive who can save the Earth from the invading alien hordes, blah blah blah...

This is a very tenuous follow-up to Green Beret - in fact, the words Green Beret II don't even appear on the box artwork, and the chap is kitted out in cool shades and a big gun rather than a floppy green hat.

It's three-part game consisting of a 3D maze followed by a vertically-scrolling shoot-'em-up and finally a platforms-and-shooting gig. Like all maze games, the first half gets pretty tedious unless you're prepared to get out the Crayolas and make a map. It looks nice, though; camouflage-drab corridors, sliding doors, piles of crates and equipment, and the inevitable slimy aliens. As you make your way through the maze, investigating each room in turn, you must shoot it out with them, ducking under their fire and melting them into slimy puddles with your energy gun. The aliens carry ammunition, lift passes and computer code-cards, all of which you will need to complete the maze. When you find a computer room, you must "log on" using the appropriate card. There's an inventory display on the top right, which you flip through to select the correct card, and different types of ammunition. You also have to keep your eye on your oxygen level. The aliens breathe some sort of poisonous muck, so unless you keep finding supplies of oxy-gum you'll be really choked - literally. The best idea is to make a note of the locations where you find gum, and return to pick it up when your oxymeter runs low. 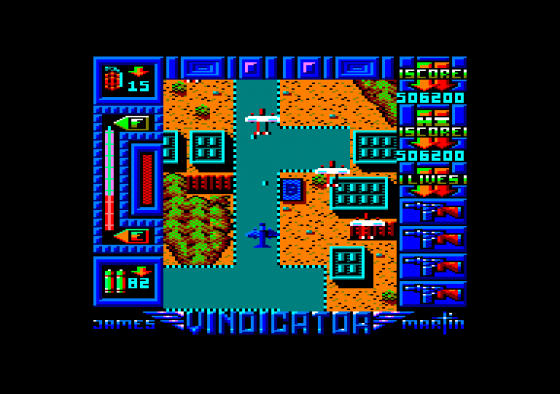 The aliens are very nicely designed, but don't present much of the challenge. The main brain-strain of the first section involves making your way through the maze and finding the passwords which will allow you into the elevators to the other levels.

Level two is much better for arcade fans; a fast-moving vertically-scrolling shoot-'em-up similar in style to Flying Shark. It consists of two phases: in the first, you have a plane armed with missiles and bombs, with which you must clear away as many as possible of the enemy tanks, planes, helicopters and gun emplacements. If you survive this phase, you get to drive through the remaining defences in a jeep armed with grenades. At the end of this section is the giant lobster featured on the cover artwork, and he's a devil to knock off.

Phase three is very much in the style of Trantor or Impossible Mission; you move along corridors looking for lifts which will take you deeper and deeper into the complex. Hopping, flying and slithering aliens assault you from all sides, but at least you don't have to worry about ammunition - it's unlimited in this section. Finding operating switches to activate lifts allow you to move nearer and nearer to your final encounter with the horrific Gog.

The Vindicator is really three games in one, and unlike many efforts of this kind, each game is of excellent quality and has plenty of original quirks. You might end up cursing it for taking up so much of your time, but you'll never regret buying it.

The Vindicator is really three games in one, and unlike many efforts of this kind, each game is of excellent quality and has plenty of original quirks. 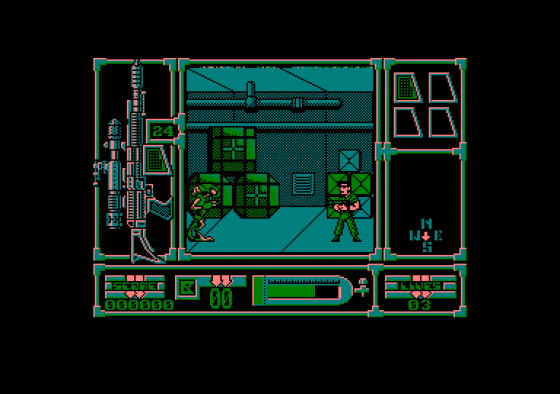 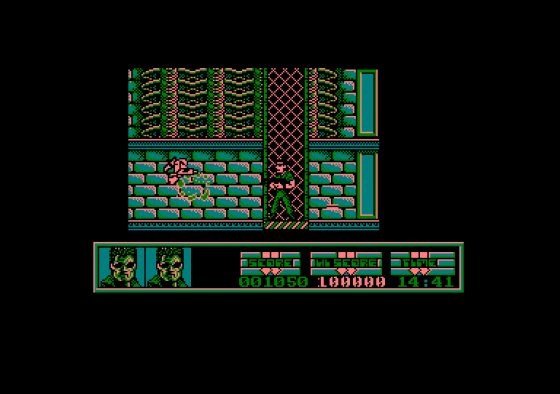