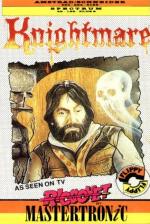 When we First reviewed Knightmare, now re-released on Ricochet, we thought it was pretty clever - a bit too clever for its own good, perhaps. It seemed to be second thoughts, it's much more approachable than that; think of it as an adventure which just happens to have nice animated graphics and you'll get the idea.

You find yourself stuck in the magic castle Damonia. Your task is simply to escape, but you have two advisers to help you. One will give true clues, the other false ones. Only one will answer each time you call for help, so it's a test of your wits as well as your imagination.

You can communicate with other inhabitants of the castle using simple one or two-word commands. You can also use magical shells if you find and combine the correct ingredients There are even combat routines, and. thankfully, a game save feature.

Like a modernised version of the Ultimate Filmation games, with a lot more intelligence and sophistication. Knightmare is a must if you like a protracted challenge.

Enjoyable graphical adventure based on the popular SFX TV series.

Like a modernised version of the Ultimate Filmation games, with a lot more intelligence and sophistication, Knightmare is a must if you like a protracted challenge.