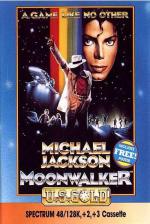 Old plastic nose is back! Michael Jackson, the world's most famous chimp-lover, has finally achieved the ultimate accolade of being pixelised in a computer game. The dancing about and posing is all done quite convincingly; someone's obviously been watching old Jacko videos and doing lots of little sketches.

Unfortunately, someone's also been watching the movie Moonwalker too because the game is based pretty closely on this box-office megaflop, and as a result has the sort of episodic, meandering quality of the film.

There are four stages in Jacko's quest to save all the lovely-wovely kiddies form the big bad giant (well, I simplify, but that's the basic plot.) In Part One, the Film Studio, Michael has to collect seven parts of a rabbit suit to disguise himself from his fans (glurk...) As he moonwalks through the horizontally-scrolling background, a radar displays indicates the location of each section of the suit, and Michael has to fend off attacks from Japanese tourists and guards.

Section Two, Michaelsville, sees old rubberlips piloting a motorbike; collect enough energy orbs and he can transform into a flying sportscar and leap over barriers.

Section Three, Club 30, is where the violence really begins; Mickey grabs a machine-gun and grooves his way around the nightclub, gunning down goons and collecting kiddies to lead them to safety.

The last bit, The Arena, is the nicest-looking, though it's pretty static; Mikey-baby takes the form of a huge glittering robot and sits in the middle of the arena, picking off stormtroopers who pop up to take a potshot at him from the balconies. Every so often a giant plasma cannon slides into view, and you must laser it before it blows you to bits.

So that's your lot; four unremarkable sections, strung together with a little gloss and a lot of crossed fingers. While most licences at least have a successful film to ride on, the extended pop video which was Moonwalker probably won't entice too many people to go for the game. The best part of the package is that it comes with a free Michael Jackson oxygen tent (Jim swears it's a plastic bag, but I just know it's something extra special because Michael is so wonderful.)

He's Bad! He's Bad! And his game's pretty awful too!

He's Bad! He's Bad! And his game's pretty awful too!