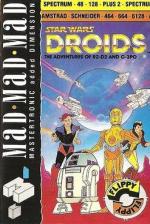 You'd have to be mad to spend loadsamoney on a big game licence, then put it out on a budget label, and make a complete cock of it too. And that's just what they are - M.A.D. - and just when you thought they were only going to put out good stuff too.

Long ago in a galaxy far away, the prophet Lu-cas hit on a fool-proof scheme to make thousands of children part with their money. He made the hit film Star Wars, then licensed companies to produce models, wallpaper, lunchboxes, pyjamas, toothpaste, and probably Star Wars fertiliser. But as the money kept rolling in, the films ran out; after Empire Strikes Back and Return of the Jedi, it all got a bit too much. To keep the gravy flowing, Georgie came up with the idea of turning the lovable droids C3-PO and R2-D2 into cartoon characters, and there was a great chuckling and rubbing of hands.

So, in producing a game based on the cartoon Droids, why have Mastertronic splodged it out on the M.A.D. label and made such a hash of it?

A less than fab graphic design and animation depicts C3-PO, trailing the smaller R2-D2, making his way along endless corridors. At the bottom of the screen is a series of icons; using the joystick or keyboard, you select new icons, then press Fire to activate the function.

The first four functions are straightforward; move left, move right, and up and down (for use in between-level elevators). Next along is a sphere representing the crystals which C3-PO can throw to deactivate enemy droids (no nasty laser weapons to frighten the kiddies). The enemy droids are boringly monochrome, poorly designed and animated, and disappear without so much as an explosion when they're hit.

There's also an icon which allows you to duck under droids flying overhead, and one to allow access to computer terminals. These are found at the end of each level, or at elevators. Logging on allows you to play a dismal subgame in which these really futuristic lightbulbs (LIGHTBULBS???!!?) flash in sequence, and you have to press keys to match the sequence. Unless you get through the subgame you'll find your way blocked by forcescreens.

As you trundle along doinking droids, you pick up extra crystals and passes for the computer terminals. As you get to higher levels, you'll also come across drills, cannon, fire sprinklers and magnets which sap your energy. The eventual aim is to complete all eight levels and escape from the nasty intergalactic prison, but such is the mediocrity of this game that I'm sure you'll feel like screaming before you've completed level two. So here we go: EEEEEEEEEHHHHHHFG! EEEEEEEEEEEEEEEEEEEEEEEE- EEEEEEEEGGGGHH!

Incredibly disappointing arcade game based on the Star Wars cartoon.

Incredibly disappointing arcade game based on the Star Wars cartoon.