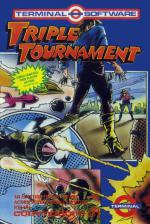 With arcade/adventure games appearing in the shops, Terminal is replying with a three-in-one arcade game.

At the start you may select one life per game and play all three games or have all three lives on the game of your choice.

The first game is a cowboy "shoot-it-out" similar to one of the early arcade machines which started the video game craze a few years ago.

The second game is Space Race. It involves keeping your spaceship on a path and collecting points as you go. The concept is unoriginal and not that interesting.

The last game is Kamikazi, on the high seas. The object is to shoot and destroy various planes which tend to crash into your ship.

The graphics do not incorporate many new or good techniques. General quality is average. I won't write it off because it is better than some games although there is plenty of room for improvement. No instructions were supplied.

Once you have finished playing you get a breakdown of your scores for each life.

The graphics do not incorporate many new or good techniques... I won't write it off because it is better than some games although there is plenty of room for improvement.
Logout