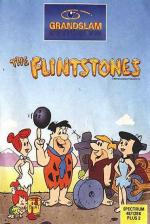 I never really thought of myself as a child molester. I thought I had a kind of laid-back, live-and-let-live approach to kiddies. And I guess I did, until the Flintstones came along with that godforsaken kid, Pebbles. The game supposedly places you in the role of a caring father, but I could quite happily stick the over-smily cheesy brat in the blender. Look, I'll try and explain.

You know what it's like in Bedrock. Well, you probably don't, so I'll tell you. It's a pretty sleepy little place. Not too many things to do. About the most exciting thing a guy can get into on his day off is a bowling sensation with his buddies.

So it's understandable you're liable to get a might distraught when the Mrs, Wilma, insists you get the whole interior of your cave painted before you go out. And on top of that, you've got to look after your kid, Pebbles, while Wilma flounces off to her mother's for the day.

So there you are, armed with a squirrel doused in paint and faced with a huge wall. Right. No time to waste. You've only got four pre-historic egg-timers to run out for Mrs Naggy gets back and grounds you for the evening. OK. Bosh, bosh, shum, shum, wallop, wallop. Loads of paint. Going lovely, isn't it? Filling up the paint brush is a piece of cake - just toddle over to the bucket, splosh the squirrel in it and shoot back to the wall. Quick check on Pebbles, who's writing on the walls with her crayons. Fine. Oh No! Rush over to Pebbles, grab her, the squirrel escapes, dump Pebbles back in her play pen, run around madly trying to catch the squirrel all the paint falls off the squirrel so you've got to get some more, back to the wall bosh bosh shum shum opp missed a bit more paint shum bosh wallop etc etc.

And just as you're about to fill up your paintbrush for the final splosh your last eggtimer runs out and Wilma comes back and you go completely mad and you smash everything in the house into a million tiny bits and set the squirrel on Wilma and stuff Pebbles through the window and trash the TV set and and and... You'll have to excuse me, it's just so frustrating.

Anyway, after about a thousand attempts (it really is unspeakably difficult) you will be allowed to get own to some serious bowling.

Now, Bedrock roads aren't the best in the world. And driving with stone wheels doesn't make life any easier. The next stage of the game involves getting from Barney's house to the bowling alley. This bit is a little like Moon Buggy, the old arcade game, with the buggy bouncing along, and you having to jump over craters and boulders. Should you hit any particularly unsuitable terrain, a wheel files off Fred's motor and you'll have to go about finding and fitting a replacement.

The graphics throughout are both cute to look at and functional. But there are one or two problems. In the painting scene, you can be absolutely sure that you've covered the whole wall, and yet the game still seems unwilling to register the fact.

The bowling section is a very well presented part, but it's let down a tiny bit by thoughtless mechanics. After Fred has bowled, using the up and down controls to position him in the alley, and a sliding speedometer to determine how hard he bowls, it's Barney's turn. Barney waddles up and bowls his pseudo-random bowl in a fab graphical manner. The only problem is that this takes a number of seconds and one you've seen it once, the novelty wears a little thin. After the third go, you couldn't really give a flying bonk what it looks like - you just want to know what score you've got to beat!

After bowling you drive back home with Barney, orify to discover that Pebbles has done a bunk and is nowhere in sight. And then it's Platform-time.

Pebbles is atop a huge stone platform on a building site, and you've got to get her down before she plunges to her death in a cement mixer (OK, so this part is maybe wishful thinking, there's no cement mixer).

Flintstones is a highly playable and competent conversion of the much underrated cartoon. It has niggling points, as mentioned earlier, but on the whole, when you weigh it all up and compare it to the price of paint and real squirrels, it's pretty darned good.

Good graphics and a variety of game styles. Immense difficulty makes it last.

Good graphics and a variety of game styles. Immense difficulty makes it last too.