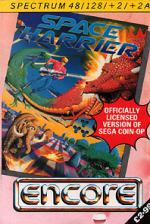 Originally written by the team behind Ghost'n'Goblins and Commando, Space Harrier was regarded as a very ambitious conversion of the Sega coin-op when it first appeared, and was largely well-received despite some criticism that the graphics were difficult to make out.

Things haven't improved with age (these things don't, you know), but the game still stands up pretty well, especially since Space Harrier II has just appeared, and doesn't really fare much better.

As your valiant space knight flies through the interstellar void zapping endless hordes of boogers flying towards him, the perspective graphics struggle to retain the wonderfulness of the original coin-op; of course, they don't manage, but they have a jolly good try. The flickering chessboard ground pattern is hypnotic, and the backgrounds scroll smoothly in all directions, while the giant flying heads, serpents and whirling bladey things, inevitably depicted in mono, move so fast that it's really just a matter of hammering the fire button and hoping you hit something.

There isn't much time to aim and fire; and if you're hit by a flying meteor and drop senseless to the ground, your usual reaction will be 'Where the $!&$!did that come from!' In effect the game's very fast and frantic, but there doesn't seem to be much skill involved.

The end-of-level baddies are rather wonderful, and at this price it's worth getting Space Harrier if only because it might save you having to fork out a lot more on Space Harrier II. But don't tell Grandslam!

Very fast and frantic, but there doesn't seem to be much skill involved. The end-of-level baddies are rather wonderful, though.