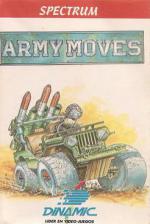 Dinamic Software is one of the more experienced programming teams to have emerged recently. You've probably not heard of them yet because they originate from Spain. It's only now Dinamic's first title gets a release over here, brought to our shores by way of Ocean (I'm sure there's a completely tragic pun somewhere there). The game's called Army Moves and it is really very good indeed.

It's a down to-earth sort of game which wastes very little time pretending to be anything other than a high-quality killing spree. So, major points on the getting-down-to-business front.

Your mission, as a member of a crack commando team, is to infiltrate enemy headquarters and steal some information of some sort which will aid your side in the conflict. Quite what the nature of the 'conflict' is isn't made clear, which is probably a good thing. With the scale of violence that you will encounter almost instantly, it's safe to assume that negotiations aren't really feasible.

The game is made up of a number {INDECIPHERABLE} your goal. The further you get into the game, the tougher things get - as you would expect.

Stage One is quite astonishingly difficult for the first few attempts. None of the 'oh, we'll let them get a little way into the game before hitting them with anything heavy' mentality here. No. You've got to fight for all you're worth right from the beginning. Your mode of transport for this stage is a very tough truck-cum-rocket-launcher which bowls along a heavily shelled and battle-torn iron viaduct construction at what can only really be described as a fair old lick.

The graphics are great. Your truck trundles and bounces and slides along the steel constructions which are equally impressive to look at - all twisted metal and bomb blasts. The enemy helicopters are good to look at too, flying at an aggressive angle and being very uncooperative.

Jumping the large holes is very tricky indeed. You'll have to time it just right and push up the stick, throwing yourself into the {INDECIPHERABLE} moving the stick forward again in order to gain distance. It's advisable to lob a couple of your rather unattractive missiles before embarking on the jump, to avoid being unpleasantly surprised by a helicopter or truck or something. Misjudging the size of the hole is a serious mistake, as you'll probably tumble back down into it, even if you think you will reach the other side. The enemy at this point comprises trucks (which look very similar to your own except they are coming the other way) and helicopters. The trucks drive directly at you, jumping gaps when necessary, and seem not to be particularly concerned if they have to kill themselves in order to take you out. Blow the trucks away by launching one of your ground-ground missiles. Often, as they leap into the air you'll do the same, it may miss your missiles and come crashing down on you. In such situations, it's best to call upon a speedy employment of the deceleration control followed by slinging a couple of ground-to-air rockets into the sky. If you goof on this manoeuvre you'll probably end up being blown into tiny bits by the chopper's rockets.

The further you manage to get in this stage, the more frequent the shell-torn holes in the girder-construction beneath you are. Falling through will smash your truck to pieces and so should be avoided.

Eventually you'll find yourself at the end of Stage One which is no mean feat if you're playing on your own, as the frenetic style of gameplay and the fact that you have to use the keyboard as well as the joystick in order to launch your second form of missiles.

On to the second part and you find yourself in a helicopter gunship playing a very impressive version of Scramble/Penetrator. Here you've got to wipe out enemy missile silos while graphically impressive enemy jets scream back and forth doing their best to hamper your efforts.

You stay in the helicopter during stages three and four, though you get to bomb different sorts of things.

At Stage Five you'll find yourself on foot and things get to get a little surreal as giant bird-things fly overhead being scary while you are battling it out with enemy commandos etc. Stages Six and Seven feature more hairy escapades behind enemy lines, but you'll just have to get that far into the game for yourself, because I'm not going to tell you (and besides I don't know).

Army Moves is a fantastically violent military romp through numerous varied stages which offer a fairly genuine challenge. I can't remember a game since Ghosts 'N Goblins that was so immediately addictive/infuriating.

Highly violent and very morally unsound with great graphics and gameplay. Worth keeping an eye on Dinamic.

Highly violent and very morally unsound with great graphics and gameplay. Worth keeping an eye on Dinamic.