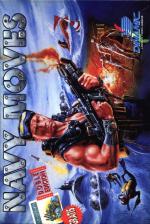 There are very few things that make me furious and rabid with anger and despair. Games that are completely impossible from the very beginning come pretty close.

Navy Moves, the sequel to Army Moves, fact fans, is the latest offering from the people at Dinamic. They've always had a reputation for producing tough games, but I fear they've gone insane with NM.

The first section places you in a rubber dinghy, skittering along the surface of a dark and decidedly unsettled sea. You're on your way to the enemy base with a sackful of Semtex sandwiches with which to scupper the baddies' plane.

The route to the base - which actually doesn't appear until part 2 - is bloody difficult. You bounce along the water, jumping over deadly pink candyfloss, which we're told are in fact USSEX-12 mines, until you reach a safe zone, marked by a buoy. Easy? Hardly. The mines go on and on and on, and on and on and on. They come in twos and threes and on their own and they're always a slightly different distance apart. Whenever you're blown up by one, you go back to the start of the section. Most of the time there's hardly enough room to land your dinghy between the mines and you have to bounce along the water, jumping, jumping and jumping in order to get through. This stage is simply too hard. Playability depleting silliness.

Once past the first two waves of mines, you have to take on the real nasty types. Enemy troops on jetski bikes ride on from either side of the screen and fire harpoon guns at you. They also crash into you. Since there's virtually no room to move around on the play area, making enough room for yourself to turn around and fire backwards is maddeningly hard. IT'S TOO HARD! I DON'T LIKE IT!!

If you can control yourself and not hurl the joystick at the telly through ulcers and blood pressure worries, you'll get onto an underwater section where octopi and sea monsters are your foes.

Once you're inside the base, things begin to take a slightly more gentle turn. You run around the complex, dodging the agents and trying to get together the necessary goodies to blow the place sky high.

Graphically, we're talking a pretty high sophis' level. You can easily tell what everything is and everything is presented clearly. Although the play area is tiny and the scroll far from smooth, Navy Moves is far more attractive than most. It's a shame that the playability has been cursed with such a high difficulty level.

Good looking though annoying and difficult. Just like me.

Although the play area is tiny and the scroll far from smooth, Navy Moves is far more attractive than most. It's a shame that the playability in part one has been cursed with such a high difficulty level.