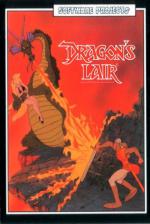 Dragon's Lair was always going to be an impossible conversion to do. The original coin-op was the first ever laser-disc arcade game with fabulous real cartoon graphics and very peculiar gameplay.

Software Projects has managed to get the gameplay right... Nuff said.

Loading the program is a pain because it's a multi-load thing. The structure is as follows: on one side of the tape is the main program. On the other side are the various modules which make up the screens. There are nine parts of the game, and you must return to the beginning every time you lose all your lives. It drove me scatty.

The game itself, like its coin-op original, has limited interaction for a lot of the time. You only have to make keyboard or joystick moves at crucial moments. The rest of the time the action carries on regardless.

Now, while all this is very well in the arcades, it doesn't work quite as well on the Spectrum. In the arcade you could stand back and be amazed at the cartoon graphics which glided across the screen with amazing precision etc, etc. On the Spectrum, you can't. The graphics simply aren't up to it.

The first section is called 'The Falling Disk'. It involves Dirk and a falling disc. As the dragon lives deep underground, you must find some way to get down to him. A suitably precarious route is offered by a large wooden disc which hovers in the middle of a very deep shaft.

A couple of metres down the shaft, though, and everything turns sour for Dirk. An Air Genie, which wafts up the shaft and blows you all over the disc. As the disc descends, you fight against being blown off by an increasing number of Genies. This part is so unimaginably difficult, I cannot believe anyone but the most resolute player solving it.

Complete this part and the way is left clear for Stage 2.

Lucky Dirk now works his way along a very dangerous hallway, in order to get closer to the dragon's lair. Nothing is as easy as it looks, though, and he's unpleasantly assaulted by numerous pieces of dead people. You wait for the correct moment, and then let fly with a sweeping blow, striking the skulls. This part of the game is very inadequate indeed, forcing you to jerk the joystick around - often with no effect.

You will die with unnerving regularity, which leads you through to a sub-routine in which you are split into little pieces, and then reformed. Were it possible to escape from this routine, things would not be as bad. Unfortunately, you can't, and after the third man has been lost, you begin to wish that something more useful had been done with the memory.

The rest of the game is numerous screens of the same ilk, with exciting names such as Burning Ropes, The Weapons Room, Ramps and Giddy Goons, The Tentacle Room and The Deadly Checkerboard.

It all sounds pretty stunning but I'd already been stunned once too often.

A Big disappointment, having neither stunning graphics or exciting gameplay... And the multi-loads are a pain.

A big disappointment, having neither stunning graphics or exciting gameplay... And the multi-loads are a pain.