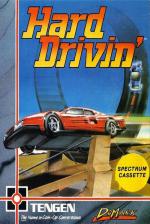 Hard Drivin? They're not kidding! This has got to be one of the toughest driving games ever released. Not because you're racing ultra-proficient steel-nerved opponents, but because the simulation of driving the car is so realistic in its difficulty.

Among the bunch of driving action games we've had this month, Hard Driving is certainly the closest to driving a real car. However, this doesn't necessarily make it a more enjoyable game.

There are essentially two games in Hard. You can belt around the speed track, amassing points by taking the curves at ever-increasing speeds. The other option - the more entertaining in the short term - is the Stunt Track. Here, innocent sounding obstacles like The Bridge and The Loop prove mind-bendingly difficult nightmares of car control.

I'm making the controls sound a bit horrific aren't I? Well, they're not as bad as all that. I think the problem is that after playing games with hi/lo gears and steering with only two gradients. Hard Driving's precision makes an unexpected, and initially tiresome change.

If you're a real stickler for accuracy (and mad) you can change every gear yourself. If you're into getting some serious speed under way, select the auto-box and get going. Steering is really a bit ridiculous. The original arcade game was obviously controlled with a steering wheel. The 16 bit versions are best controlled with mouse or analogue (non self-centering) joystick.

In a rather misplaced attempt at universal similarity, the Speccy version doesn't have self centering steering either. After you've turned a corner, you have to remember to center the wheel, which is a slow process.

Alternatively, you can tap the space bar which automatically makes the car straighten up instantly. Both of these are a bit naff since a) real cars don't simply go round in circles if you don't centre the wheel, and b) pressing the space bar while using the joystick is a pain in the neck.

Aside from this, Hard Driving is tops. The graphics are filled 3-D shapes which move at an acceptable rate (they're a bit jerky actually) and are all varying shades of blue and black.

The lower portion of the screen deals with all the details that real drivers don't worry about (oil pressure, temperature etc).

You're given the option of driving on the right or left hand side of the road. This is actually a pretty important factor, since the gameworld is populated by the most unsympathetic drivers this side of the M4. They'll smash into you from behind. They'll plough into you head on and they'll sand you spinning off road. None of this is through any malicious intent they're all simply intent on completing their mindless journeys.

Without any question, if you're out for laughs, the best feature of the game is the action replay. You can spend many a happy hour setting up the most gruesome crashes and watching them played back at excellent third-person perspective angles.

Hard Driving is an excellent exercise in mega-maths programming, and its combination of morbid crash-fascination and genuine intricate accuracy make it a sure-fire hit.