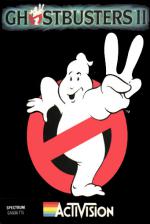 They're coming to save the world - for a second time! After a number of years scraping a living from appearing on TV re-living their spook-ridding escapades and unsuccessfully entertaining at children's parties, the Ghostbusters are about to don their funny jumpsuits and get slimey once again.

Since the end of the last movie, things have moved on quite a way. Sigourney Weaver has dropped a suspicious sprog and the Ghostbusters have had their busting licence revoked after virtually trashing New York the last time the spooks came around.

With the film due for release in the first week of December Activision have picked the prime time to release: just in time to catch the media whirl surrounding the movie.

The main three sections of the game are, of course, translations of the memorable moments in the movie.

We join the action after Sigourney's kid has been mysteriously whooshed all over the town and pursued by slime. The Busters have reformed and trying to track down the scumbag spectors.

Their investigations and Spook-o-meter lead them into the middle of a busy road. Below, they discover an ancient sewer network. Having dug a hole big enough to fit through, you must lower Peter down the hole in order to get proof of Ghostly goings on and therefore recover the licence to bust.

On your way down, you've got to zap as many fiends as possible. You've got to ensure that Peter doesn't come a cropper through any of the nasty tricks and traps awaiting him.

This stage completed, you find yourself and the rest of the guys running around the base of the walking Statue of Liberty shooting ghosts and collecting slime.

Here you have to guide a spinning fireball around the screen and shoot down an ever-increasing army of evil spooks. Once plugged, each spook drops a globule of slime.

(Important movie info:- in the film the guys animate the Statue of Liberty with a load of dancing slime - honest - York)

The final section of the game takes place in the art gallery where Sigourney has been restoring a rather horrible painting of Mr Evil.

First you have to slide down the poles into the gallery. This is a tricky event for a start. The Ghostbusters seem to have got extremely fragile all of a sudden, and can be killed stone or at the very least stunned if you don't put them on the ground in the most gentle manner possible.

The bad guys are draining the lifeblood from - yes it's that kid again. Once safely on the floor, you must grab Sigourney's sprog from the clutches of the evil forces.

Once you've plucked him from the altar of doom, it's important that he doesn't get snatched back. You've got to kill the baddie with your special beam. (Fnar) After this, Mr Big himself will step out of the painting and attack you in a frenzy. Oooer!

Using the two characters carrying the beam lasers (quite a tricky maneouvre) you've got to get him cornered and zap until he melts away.