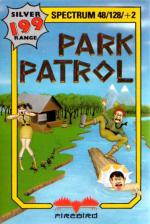 Park Patrol looks like it could be a re-working of the age-old classic, Frogger, the game where you've got to make your way across a river dodging logs and other water-bound obstacles. Which means it's a little disappointing to discover that it's about being a ranger in a nature park and collecting litter. Adversaries you will encounter include swimmers, ants, snakes and logs. Very threatening. Acceptable gameplay is marred by shocking graphics and an initial idea a so boring i' rather listen to my grandmother explaining how to make strawberry jam. Two pounds could be spent in far better ways, though I conceded this isn't actually the epitome of dreadfulness. Not quite.