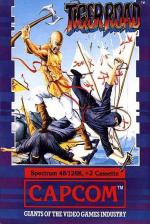 US Gold in Own-Trumpet Blow Shock! "Undoubtedly one of the greatest martial arts games ever written". Yeh? And I'm the King of Siam.

Tiger Road is definitely one of the most reasonable martial arts games ever written, and that's about the of it. Ropey storyline for a start. Kiddies kidnapped by evil emperor to be trained as horrible assassins. Lee Wong, loyal disciple of Goodness and Light, decides to embark on rescue mission. Iffy eh?

Tiger Road is USG's nth Capcom licence and so has an awful lot to live up to in the shadow of Streetfighter and 1943. Unfortunately, it doesn't quite make it for reasons I'll explain later. First, let's break exactly what's going on.

The screen scrolls from right to left and the graphics aren't too great. Your character moves around the screen somewhat jerkily. In most of the scenes there's a fair bit of colour, but there's been no attempt - so far as I could tell - to minimise attribute nightmares.

The bad guys you're up against are wild-eyed kamikaze ninja psychopaths. There's the little pestering sort inflicts small, but frequent amounts of damage, and there's the huge end-of-level characters can kill you straight off.

Combatting the meanies is more simple than in most of this ilk. No special moves - just a "strike" key which will employ whatever weapon you have at the time.

Extra weapons can be picked up by breaking open pots which litter the area. There's a mace, an axe and a stick, none of which seem to be any more or less effective than the others.

Although things aren't sounding too fantastic so far, Tiger Road isn't without its merits. It's played across a large area of streets and tunnels and abandoned palaces and the action is pretty constant. You can bypass some baddies by hurtling up staircases or jumping over them.

The further into the game you get, the tougher the rooms get. From the straightforward street scene, a bunch of Ninjas are your only foes, you graduate to enclosed rooms with horrid fluffy monsters which around and savage you.

It definitely gets better as things go along, and there doesn't seem to be any lack of imagination on the gameplay front. Just you think you've got the hang of the screen layout, you find yourself in a vertically scrolling room being chased all over the shop by dragon heads. Phwer.

Tiger Road is perfectly reasonable, there's lots going on and it's neither too easy or too hard. I think it's simply the polishing-off section where its development maybe fell down. The graphics quickly, but they jerk and what colour there is clashes like billio. Most of these things are nearly excusable but you really shouldn't invite criticism by professing that your game is so fantastic.

Reasonable though unastonishing ninja game. Worth a look.

Reasonable though not astonishing ninja game. Worth a look.