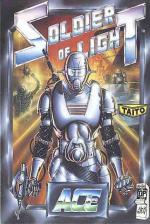 This reviewing lark isn't all it's cracked up to be. OK, so it's got loads of perks - as many copies of EastEnders as you can put down your trousers, endless supplies of Gremlin springy promotional "Things" - but there is a definite downside lurking just beyond the flashing warning beacon that is over-enthusiasm.

Soldier of Light is ACE Software's first coin-op tie-in. It's been coded by Christian Urquart who was responsible for the business end of Xecutor, ACE's first and much acclaimed release. Comparatively speaking, Soldier of Light doesn't come close. While X, was original and exciting, Soldier merely contrives to be an acceptable, though not particularly faithful, conversion.

Scrolling from left to right across a range of monochrome backdrops we find Xain, defender of all that is worth defending, and clobberer of everything else. The rate at which you can wipe out the bed guys is determined by the size of your equipment (fnar fnar). By picking up 'P' signs on the ground, you can enhance your firepower from a single-shot no-use-to-anyone affair, to the completely invincible gun which fires three parallel bolts of photon death each time you hit fire.

The enemy troops come at you in waves, having a nagging, irritating effect on your damage meter (top middle of screen). Even so, it's vital that you don't get hit too many times in the early stages of a level, as you'll need all your energy at the end when you complete the End of Level Larger-than-the-rest Alien.

The graphics, as you can see, aren't particularly impressive. They're a bit dumpy, and not especially attractive. Compared with some of the budget material coming from people like Players, it's a pretty poor show. Scrolling is handled merely in a workmanlike manner.

As you move further into the levels, life becomes more and more difficult. Between each level there is a bonus stage in which you find yourself in a space ship, confronted with wave upon wave of aliens.

Each level has additional nasties. There are birds which fly out of tree trunks and divebomb you, and plants which will swallow you at the drop of a hat. An increasing number of aliens must be dealt with.

It's no great shakes in any department Somewhat disappointing.

Reasonable, though disappointing conversion of what was an extremely convertible game. Mediocre.

Reasonable, though disappointing conversion of what was an extremely convertible game. Mediocre