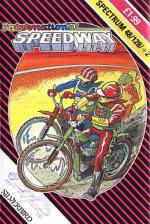 What possible good can Probe do themselves by releasing a game of such shockingly low quality?

International Speedway captures the thrills and spills of a speed-meet as effectively as a Chinese take-away embodies eastern communist philosophy. I.S. Is full of the really rather unacceptable things that people used to get away with (just) four years ago by putting them down to the "limitations of the machine". Pooh. This is downright shoddy.

The track is presented as a 3D perspective affair stretching off into the distance. Now, speedway aficionados will probably know what the special speedway track is shaped like. It's a squashed circle. And it never changes. The result is that while other 3D race games could maybe excuse themselves some graphic ineptitude by having a very interesting course to negotiate, I.S. can't afford itself such luxuries.

The graphics are very, very bad. How can I explain. They're really bad. Still, many a great game has lurked behind very poor graphics, although I can't quite call any to mind right now, so on with the race.

Having selected what you want to be called and what nationality you want to be, you are allocated a race position (the inside lane to begin, moving further out the better you do in the heats) and presented with the stop-go indicators so loved by the speedway fraternity. With a wail of engines revving (well, a whistle) the three lights go green (ready) green (steady) and green (GOOOOO!) and yerroff. Well, all the others seem to be off while you're left standing at the start. Here's a point that annoys me about these games, it seems impossible to keep up with the computer controlled bikes to begin with. They scream away and you can't catch them 'til the first bend.

Even the barging that goes on in the real thing isn't very well implemented. No matter how you attempt to knock off another player (kyak) or how unfairly they surprise you from behind (kyup) you always seem to come a cropper. Damned unfair.

So, what do we think of International Speedway? It's a lot of old tosh and you'd have to be mad to spend even 20p on it.