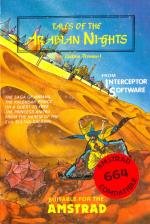 The romantic hero is not yet dead - like Valentino on his white stallion you have to go to the rescue of a fair damsel in distress. The only problem is she's your sister and there's a high probability you'll get killed trying. The game combines platform screens with scrolling sections where you have to avoid things.

There are eight stages in the game as you play Imrahil, trying to get to the battlements of the Sultan's palace where Anitra, your sister, is being held captive. The first stage is set aboard Sinbad's ship in the Red Sea and Imrahil has to collect seven golden jugs in the correct order.

The jugs are placed all over the ship and each one has a letter on it. The letters spell out the word ARABIAN and have to be collected in that order. This is far from easy since there are dangers on the screen to try to stop you. A cannon, octopus and plucked turkey (or what looks like one) all lose you a life when touched and send you back to the start of the screen. The other major hazard is falling while leaping around the rigging of the ship because long drops also send you back to the start of the screen. There is only one successful way to get all the jugs and it may take a while to find.

If you complete this stage you move from the sea to a river. Here you control a raft's movement left or right on the screen as Imrahil sits on it, paddling against the current. From over the background of palms fly large rocks which have to be avoided or they will sink the raft - this is easily done. More of a problem is caused by crocodiles that surface along the surface along the river and have to be paddled over while they are submerged or shot with lightning bolts.

Having done that, it's back to the hard platform action as Imrahil tries to pick up another seven jugs in a cave. Once again they have to spell out the word Arabian and this time there are a group of genies who move about screen trying to stop you. Like the dangers on screen one, the genies follow regular movement patterns which have to be worked out so that they can be avoided. One genie does home in on you though and like the bird on the first screen can cause many problems.

A flying carpet sequence over a desert is the fourth stage and after it follow more platform screens where you collect jugs. All the stages are quite tough and need constant attention and good timing to complete. It proves very frustrating at first, but once you know the pattern for a screen you should be able to repeat it.

The version of the program which we've reviewed is in fact the second one for the Amstrad that has appeared. The first one showed up at the PCW show and according to Interceptor 2,000-3,000 copies were probably sold before they decided to stop distributing it.

The decision was made because the company weren't 100% happy with the game and wanted to wait for this second version which was being programmed by a different person. Version one had less features on it and was a lot easier but was graphically more impressive except for some dodgy scrolling for the river and desert stages.

The games will now be sold back to back on the same tape so that you can sample them both. Those of you feeling aggrieved at having bought the first version, fear not - for a fee of 50 pence to cover postage and packing Interceptor will replace the first version with the tape containing both games.

For the record, version one would get slightly lower ratings than version two.

N. Can become frustrating if you can't crack a screen. N. Very accurate positioning is needed for climbing ladders.

I rather liked this. The first screen in particular has just the right balance of difficulty and disaster. It looks easy, but isn't. Unfortunately, other screens aren't quite so interesting or so demanding and the game suffers accordingly.

I rather liked this. The first screen in particular has just the right balance of difficulty and disaster. It looks easy, but isn't.