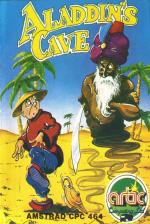 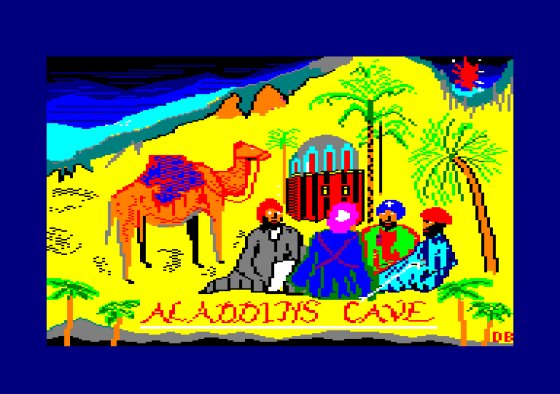 This game was written by the man who brought you one of the versions of Tales Of The Arabian Nights. Initially, I had the sinking feeling that this was a rip-off of said game. Fortunately as you get into the game the similarity is mostly in the graphics with a good deal of variety in the gameplay.

There are only sixteen rooms in the game but each one has a secret which has to be discovered in order to progress through to the finish. The screens mostly take the form of a platform layout around which Aladdin has to make his way in search of objects. These allow Aladdin to transform himself into different states in order to complete tasks or to remove obstacles from his way.

The screens are connected in a convoluted fashion which needs to be mapped out and most are full of dangers to which Aladdin can fall prey: Spiders, birds, falling rocks and monkeys all kill on contact, as do long drops off short ledges if you don't look where you're going. All these dangers move in patterns, so that with a bit of observation and joystick dexterity, Aladdin can get by them.

The set of objects on individual screens can be picked up to give you the power to make one of four transformations, into a bird, monkey dolphin or genie. The objects have all to be collected before going off screen or they reappear in their starting places. Once gained, the power will enable Aladdin to get past different obstacles.

The abilities of each form are fairly obvious with the monkey being able to climb things, the bird being able to fly, the dolphin swim and the genie float in the air. You'll have to find out when these skills are required but, again, it's mostly a matter of common sense.

There are some nice features in the game like a geyser that lifts things up and the repelling floor plates. The sound throughout the game is pleasant and atmospheric and if it does start to annoy it can be turned off leaving just the sound effects.

The gameplay is fairly simple platform stuff until you discover the multiple powers but I suspect that even then the game may not be complicated enough for many. Several ideas have been cribbed from Arabian Nights but the transformations do enough to make the game fairly original, but still a little overpriced for what it is.

No, the graphics aren't terribly original. In fact, they're not at all original. But that didn't really bother me - I can only take so much originality at any one time. In fact, I quite liked the game. Many players may find it too easy, but I found it just right. There were some nice touches - the flapping birds, the monkeys - and the music was suitably mysterious. Not one of those tough, demanding challenges - but a fellow needs a rest sometimes.

N. Small and mostly simple graphics. N. Not many screens to conquer. N. Platform element and similarities to Arabian Nights are unoriginal.

Some interesting screen design and features. It's not one of those tough, demanding challenges - but a fellow needs a rest sometimes. 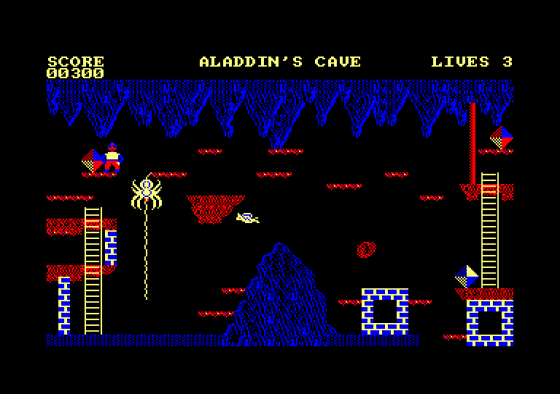