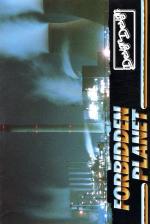 Design Design are real stalwarts of the Amstrad market and have consistently produced good value products. Their two latest products differ vastly in nature, one being an arcade adventure and this one an out and out shoot-'em-up. As usual there are many additional features that add value to the package and may make you laugh a little too.

There's no mistaking the origins of the game, it's an obvious Dark Star derivative that attempts to improve on tne classic space shoot-em-up. In true Design Design style it has some extremely silly features and comments on the instructions, high score table and game options but if you've got one of their other games you'll have seen it all before.

Two excellent additions it has are the games Halls Of The Things and Invaders which are thrown in as a bonus. This enhances the value of the package and many nostalgia-freaks may find themselves playing Invaders more than they do the main game.

If you remember the planet surface from Dark Star then you'll recognise this planet because it takes the same form. There are no space sequences on this game but the planet itself is much larger and packed with more features. The aim is to skim the planet surface in search of pieces of the Evil Lord's final message and then to crack the code that protects them.

The codes are collected by just flying through them on specific zones on the map but most of the time you'll be quite fully occupied shooting at and avoiding the defences. These consist mostly of towers of different shapes and sizes that blast deadly accurate missile fire at you. Many of these can be shot but for the most part you'll be happy to try to avoid everything.

The planet is also equipped with force fields (plasma guides) that have to be flown through. Anything that manages to hit your ship will damage its shields which can quickly disappear because of the heavy opposition you face. Energy can be replenished at various energy zones on the map but mostly you won't have time to get to one before the end arrives. Other features include dislocation zones, teleports to you and me, that plonk the ship down elsewhere on the planet and not always to your advantage.

The action is very fast and furious with everything being thrown at you but at times the planet surface becomes totally invisible leaving you with a black screen. The game-play is extremely tough but not unaddictive, its major problem being the control of the ship which is extremely slow to make turns. There's not much strategy involved, just a lot of blasting and moving but fans of the genre will like it. Along with the other two games it makes a pleasing package but if you've got Dark Star already you may feel more than a little cheated if you buy it.

Yes, it's another round of shooting towers, dodging flak and flying through shapes. Your turning circle must be a good 100 miles across, and the flak's so thick you could get out and walk on it. Mustn't complain though, because it's only the difficulty that makes it worth playing. I preferred Dark Star. Come to that, I preferred the Invaders.

Crucial shapes are invisible, and so is your energy status. Not really playable.

Weird and humorous features in a game that's not really playable. Two bonus games are thrown in though.