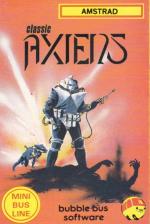 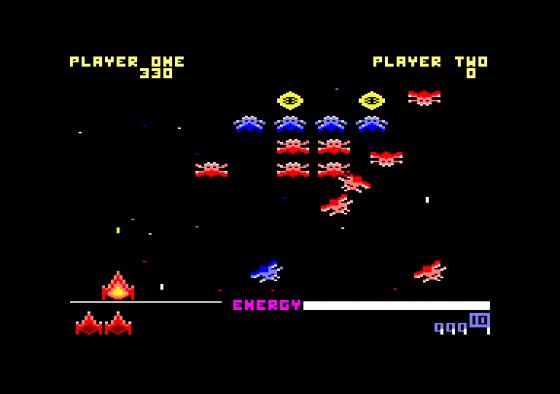 Classic Axiens is yet another Galaxians mutant. However, I'm impressed. But I can see why the Bubble Bus people have retailed this as a budget game. The keys are redefinable, though the preset ones were fine for me. You can choose a one- or two-player game.

The Axiens assume the classic Galaxian flight formation while your ears are filled with the eerie shudder of their throbbing engines. They descend upon you in ones and twos initially, increasing in number as you go through the swooping hordes of aliens. A bonus ship is awarded every 10,000 points.

As with some versions of the arcade game Galaxians, the bullets move with the ship. This is at times an annoying feature - when trying to dodge and shoot an attacking Axien. But it can, at times, be used to your advantage.

The number of Axiens you face does not increase, only their speed and ingenuity - as if they needed more of that!

The graphics, though blocky, are colourful but adequate, lacking in life and individuality. The sound is fair but nothing special. The sound of the bullets and explosions are similar to the arcade versions but lack that certain je ne sais quoi.

However, and this is a big however, for the price, this game is well worth getting. The movement is easy and smooth, but those Axiens are so *?!# infuriating.

I hope the sales figure for this game is successful: it might encourage Bubble Bus and other software houses to start marketing cheap, quality games. Personally I'm fed up with saving up for a month to buy a game only to find it loses appeal before I've saved enough to buy another!

Anyway, shoot-'em-up games are always nice to come back to after an argument with your household!

This is the type of game that keeps me amused for hours. I am a complete sucker for repetitive, mindless but very satisfying alien-bashing. The graphics are of a high standard (for this type of game anyway), as are the explosions and laser shots. My only criticism: why does everything have to slow down on higher levels?

KABLAAMMM - well, at least I saw that!

N. Axiens so infuriating it takes an angry editor to make you persist.
N. Nothing much special about it.
N. Clone.

The graphics are of a high standard (for this type of game), as are the explosions and laser shots. 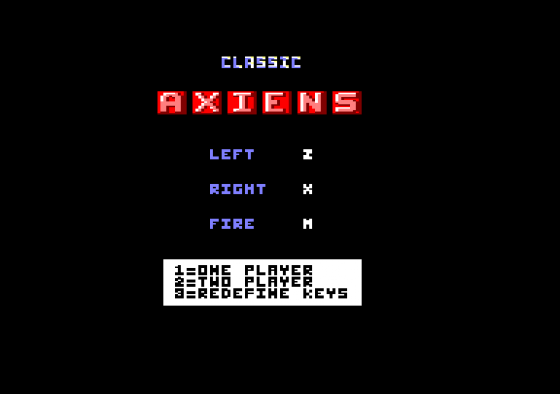