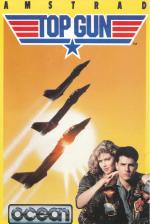 Having gone to number one in both the film and music charts, Top Gun is going for the hat-trick with a computer game. Fortunately the game concentrates on the best part of the film - the flying. You're placed in the cockpit of an F-14 Tomcat and must take on other fighters in a deadly battle to the death.

You can take on either the computer or another player, and start with three planes - which is pretty generous, given the state of the US Defence budget. In a two-player game, you're trying to shoot your opponent down three times, and in a one-player game you take on groups of three fighters that gradually increase in skill and ability.

The game screen is split down the middle; each player views one half. You have a simple display of a gun cursor and an artificial horizon on the HUD (Heads-Up Display) with a few instruments at the base of the screen. The other plane is the only thing that will appear on the screen and is drawn with vector graphics. You're armed with missiles, cannon and flares and can alter speed, height and direc tion.

It's not much of a flight simulator, although you can crash into the ground, but as a two-player game it can be quite competitive. The computer also puts up a good battle with the third wave of fighters really starting to get tough. Not a mega-game but a competent product best played with two players.

On-screen action is about as exciting as washing up after Christmas Day - gameplay is marginally better. The graphics are virtually non-existent, apart from the take-off scene. One thing that really makes Top Gun is the music: it's brilliant. Is that enough to make a game, though? No!

The sky is perfectly clear.

Not a mega-game, but a competent product best played with two players.