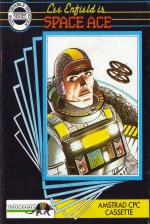 Space Ace is the first in a series of the Time Troubleshooter series, in which you're introduced to the time traveller Lee Enfield. He'll be in all of the games, which are set in various periods of the past, present and future. This one's set in the future.

You may think there's a distinct similarity between this and Prohibition, and you wouldn't be wrong. The setting is the surface of another planet which has buildings and craters for monsters, snipers and enemy soldiers to hide behind. On the screen is the sight of your laser rifle with four little arrows in it. A sensor in your gun lights up the appropriate arrow to indicate in which direction you should move the sight to find your target.

The targets can fire back at you. but fortunately your gun has another sensor that detects when they're going to fire. A beeping sound increases in pitch when they're in a position to fire. Eventually they will fire and you'll lose a life. You do have a shield, but you only have enough energy to power it for a certain time. Once you've found your target you fire until they die. There's a kick to your laser rifle, so the sight jumps about a bit.

The gameplay is identical to Prohibition with a couple of minor differences. The first difference is that, rather than an on-screen countdown warning of how close your enemy is to firing, there's the beeping sound. The countdown in Prohibition was much easier to interpret. The other main difference is that in Prohibition you had a long street in which the gangsters appeared, whereas here you get multiple levels. To complete a level you first have to kill a set number of enemies and then a globe that throws your sights off target.

Sound is simple and boring; there's only a tune on the title screen. The graphics are very pretty, but sometimes the aliens are virtually impossible to see, since they're the same colour as the background.

The message has to be that if you've got Prohibition you won't want this, because it's effectively the same game. If you're new to the concept it will provide some fun, but quickly palls because it lacks depth.

No difficulty for greenies.

Graphics 68%
P. Detailed background graphics.
N. Not much colour and aliens are sometimes too hard to spot.

Sonics 58%
P. The music is of a high standard.
N. Spot effects in the game are simple and boring.

Grab Factor 59%
P. Easy to get into move around and shoot
N. It's Prohibition set in space.

Staying Power 44%
N. Very little variation in style of play.
N. No thought needed at all,

Zero points for originality. If you've got Prohibition, you won't want this, because it's effectively the same game.