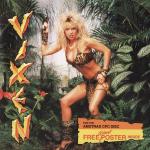 Hot on the, er, heels of Barbarian and Sam Fox's Strip Poker, here's yet another game with a page three girl on the cover - this time Corinne Russell. The setting is the planet Granath where dinosaurs still roam the surface of planet and crush the small mammalian lifeforms that scurry amongst the undergrowth. Only one human is left to fight them.

The screen is split into two areas, a horizontally scrolling playing area at the bottom and a status panel at the top. The status panel shows your score, lives, time and the fox timer. You begin the game with five lives and 100 seconds to reach the end of the level. The fox timer has a fox's head on the scale that moves to the right every time you collect a head. If the time runs out then you lose a life and it's reset.

Play begins with you standing outside a cave entrance, whip in hand. Off you jog to beat those dinosaurs to a pulp and reach the end of the level. Your reptilian foes come at you from either side and, if they touch you, a life is lost. Some are tougher than others and they take a couple of hits to kill. As you charge across the landscape, you'll find another hazard that's just as lethal as the dinosaurs: falling down a hole loses you a life.

Objects can be found hanging from trees and sticking up out of the ground. If you whip open the ones hanging from trees you discover a fox's head which can be collected by jumping or walking into it. (The fox timer is important at the end of a level, but more of that later.)

Ground-based objects contain gems, clocks, lives and poison. Life objects fairly obviously gain you a life. Gems score points and clocks give you extra time in which to complete the level.

If you manage to fill the fox timer and complete a level within the time limit then you metamorphose into a fox and enter the underground stage of the game. In this part, you have until the fox timer reaches zero to finish the level before you lose a life. This stage is much easier to complete, since the only danger you face are the holes in the floor.

Lots of points can be picked up and so can the megawhip which kills any creature with a single hit. If you lose a life at any stage the megawhip is lost.

The best graphics in the game, it must be admitted, are the digitised loading screen of you-know-who. Vixen and her foes are reasonably animated, and though the fox is a little on the small size it's no worse than the other figures.

The horizontal scrolling of the landscape is not particularly smooth, but at least it is fairly fast. A jungle-style tune plays on the title screen, but the in-game effects are limited to mere whipping sounds and pings with a brief tune every time you lose a life.

Original it ain't: there's nothing more to it than you just running around whipping things and collecting objects. The sub-level where you travel in the guise of a fox is far too easy and the main part of game where you're in human form is annoying because you can lose a life in an unavoidable situation. It would have been much better if a balance had been struck between the two extremes.

One thing that it does have is three different play areas on the cassette or disk. It's no more difficult on one level than it is on another, but you do at least get the feeling that you're getting more for your money.

Martech have a strange attitude if they think a game will sell because it includes a full colour poster of Corinne Russell.

I don't think Amstrad owners are that simple-minded: when they buy a game they want a game, not a sexist whip-'em-up.

Grab Factor 68%
P. Simply a matter of killing anything that moves.
N. Too difficult to begin with because of awkward controls.

Staying Power 64%
P. Three versions of the game...
N. ...but there's very little difference between them.

Overall 65%
P. A fun game, but it loses out on originality.

A game that includes a full colour poster of Corinne Russell? I don't think Amstrad owners are that simple-minded: when they buy a game they want a game, not a sexist whip-'em-up.