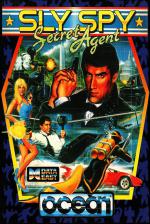 The name's Agent. Secret Agent. But you can call me by the name I was christened with - Sly Spy. Sly short for Sylvester, I think. Hard to tell really, 'cos my old dad disappeared in Mombasa after the Ruptured Camel Affair. All he left was his ambition for me - to be the world's greatest Secret Agent. I think dad would have been proud of me.

Let me tell you a bit about my typical day. First, I parachute into occupied territory. This is a piece of cake for someone of my talents. The fact that I'm under fire from enemy parachutists doesn't bother me at all; I just grab the ammunition which is conveniently floating by, blow them out of the air with my trusty Mitsubishi-Ferrari Automatic and see them crumple up and float to the ground. My parachute opens automatically as I approach the ground. I expect to get attacked by thugs, tigers and dogs, who I shoot at and karate-kick senseless before picking up a secret code from my contact. This allows me to proceed to where my trusty motorbike is waiting for me.

Things normally get a little more challenging now. There are the jet-equipped fliers trying to blow me away; the enemy motorcyclists roaring at me from all directions, guns blazing; and at the end of the road, a carful of gunmen equipped with everything from machineguns to bazookas. Lucky that apart from shooting back, I can jump from my bike into the air, duck under their fire, and pick up extra loads of ammunition along the way. There are also drink cans which give me extra energy (I can't think what they put in that Tizer) and a jetpack which lets me fly or swim faster underwater (one of W's ideas, I think).

Fighting my way onto a freighter where I take out a giant bodyguard with a series of carefully-aimed kicks, I next slip into my stylish wet-suit and take to the water. Sharks? No problem. One harpoon in the mouth and they float to the surface. Frogmen? A doddle. Zap them the same way, and they sink to the bottom. I detour casually to pick up extra ammunition and weapons; collecting icons for the Golden Gun lets me assemble a short-term superweapon which makes my shooting even more powerful.

Through the submarine cave, blasting away the sharks and frogmen, I break into the enemy missile silo and fight my way up level by level, defeating once again all the end-of-level baddies I met before, finally taking on The General himself, first figuring out how to destroy the force-field and avoid the descending spikes, then dealing with the General with extreme prejudice before he can say "With my nuclear syzygytron I will dominate the world, Mr Spy".

And that's all before breakfast!

So it's a fun-packed life as a secret agent, as you can see. So exciting, in fact, that I hear there's already a Data East coin-op based on my adventures, and a secret organisation known only as O.C.E.A.N, has converted it into a home computer game. Nine levels, nicely detailed graphics, smooth animation, non-stop action, and decent sound effects; it left me shaken but not stirred.

Super spy action! Loads of loads, each choc full of action and fun.