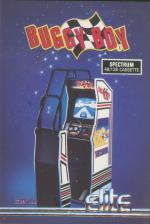 Pedal to the metal, it's race time again as the latest road burning game hits the shops. Buggy Boy contains some prodigious feats of programming, though as you'll see, you may not fin it more enjoyable than existing titles such as Outrun or Crazy Cars.

As usual your car appears in the lower centre of the screen, and the course swerves from left to right around you. In this game, though, hitting obstacles such as logs causes you to leap into the air. This can be handy if it helps you to avoid more solid objects such as boulders, but it can also cause you a bit of a head ache on landing - in fact, you can end up as a (beautifully animated) fireball.

There are five courses to race, the first an off-road trail and the others progressively harder racetracks. All are littered with obstacles including trees, boulders, logs, flags and gates, tunnels, bridges and fences. Steering is straightforward, but if you're in a tight corner you can press the fire button as you turn to execute a particularly sharp curve. By pulling the stick up and down you can also change gear, since there are only two gears, this doesn't add all that much to the game.

To squeeze between obstacles you can tilt your Baja Buggy on to two wheels b running over a small rock. More bizarrely, though, some of the obstacles just seen to disappear if you drive straight at them - there are a couple of dissolving trees, for instance.

Picking up flags and driving through flagged gates scores you extra points, and if you can get between TIME flags you score a time bonus. The aim, of course, is to complete each course before the timer runs out; subsequent tracks are loaded from tape in the 48K version, though they're all loaded at once in 128K.

Buggy Boy's good points include the huge, well animated graphics. The car is particularly good, swerving and bumping better than those of any other racing game - it's all three times the size of its rivals. Some objects are a bit of a let down; the boulders, for instance, look like the piles of icing found on Midget Gems (remember them?) The music's good too. It has to be said, though, that while it looks wonderful, Bugg Boy lacks something.

It's partly because the road layout is vague, also because some of the objects are a bit ephemeral but mostly to do with the fact that you never really get a sense of speed or excitement. Ultimately a it disappointing.