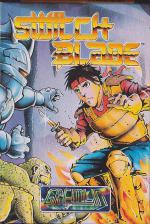 On the cyber world of Thraxx, chaos has returned. It's always the same isn't it, just when you subjugate a galactic empire and impose the rule of law across the interstellar spacelanes, things start going wrong.

In Switchblade, the chaos takes the form of the evil warrior Havok, who has exterminated the Bladeknights and shattered the ancient Flreblade into sixteen fragments (doesn't it ever occur to these warriors, wizards and heroes to invest in less shatterable weapons?)

Your quest, as the last remaining Bladeknight, Hiro, is to explore the labyrinth of the Undercity, reassemble the Fireblade and use it to defeat Havok. You start off armed with a reprogrammable Cyberarm (with of sorts of attachment like a bottle-opener, nailfile and so on), and must pick up extra weapons as you proceed.

Switchblade is described as a 'self-mapping' arcade adventure - all this means is that the display doesn't show you parts of the play area until you have entered them, but once revealed they remain on screen.

You start off on the surface of the planet, an annoying yellow-on-yellow colour scheme, but soon plunge into the stark monochrome world of the undercity. The flip-screen effect between scenes is very smooth, but the characters are very small and not particularly detailed, which makes for a rather cluttered and confusing display.

The challenge is a combination of arcade skill - finding your way around various platforms and walkways, climbing ladders, demolishing blocks, leaping over gaps - and combat action as you fight off monsters. The baddies include reptilons, scorpoids, flamehogs, kobras, and bonus monsters such as the Spikelouse, Cybat and Roborganism. To fight them you have your bare hands and feet to begin with, and as you find weapons icons, more destructive armaments like blades, scorchballs, darts, spinblades and needle bolts.

To fight, you hold down the fire button until Hiro's power bar rises to its maximum, then release the button to strike. You can strike high or low, depending on the position of the joystick.

Bonus points can be accumulated by smashing flasks, catching orbs and collecting bonus letters (what is this, an intergalactic pinball game?).

There are apparently 128 screens in all, but I managed to get fairly deep into the game without finding too much in the way of excitement or variation.

Despite good music and competent programming, there just isn't enough originality or striking novelty on Switchblade to make it rise above the ocean of other similar arcade adventures. Hard to recommend.

It's obvious that a good deal of time and effort has gone into Switchblade, but there isn't enough originality to make it worth all the effort.

It's obvious that a good deal of time and effort has gone into Switchblade, but there isn't enough originality to make it worth all the effort.